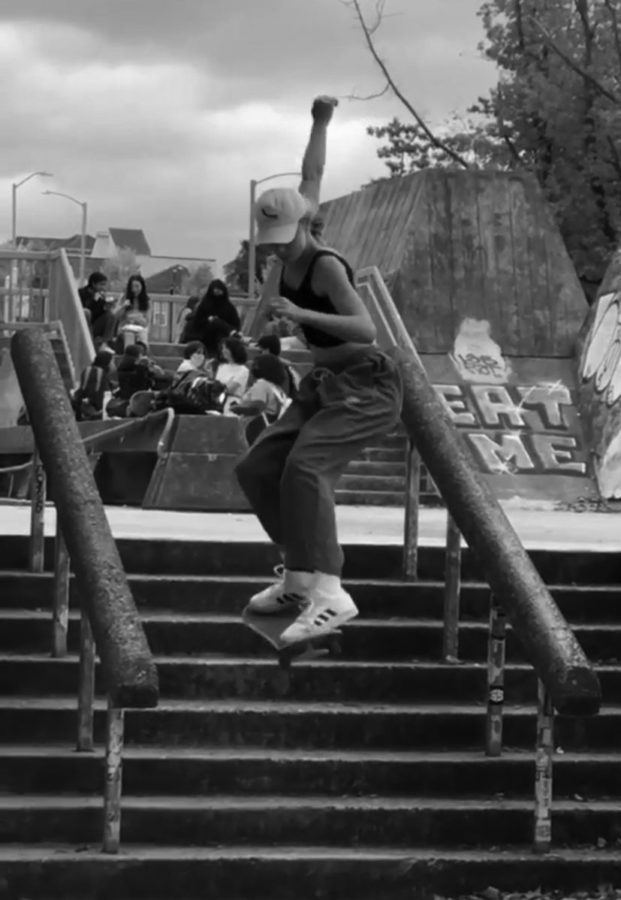 The skateboard community at Garfield fosters the individuality and expression of the people that form it. Garfield’s skateboarders are lucky enough to go to the one school in all of Seattle that has a skatepark on campus. Before school, after school and at lunch, the thriving skate community meets on the top of Medgar Evars to work on their tricks, watch others, and be surrounded by people who also enjoy skating.

This independent, free-thinking sport attracts creative people who like to do their own thing with a supportive community. There are no teams, no rules, no fouls. Skateboarding allows people to work at their own pace, on their own things.

Sarah Lessig, a freshman at Garfield, was inspired to start skating almost two years ago after seeing people skate and wanting to try it for herself. She quickly developed her skills and in doing so, she realised that her love for skating “isn’t completely about the actual skating part of it, but a lot about the culture, community and friends.”

Skaters like Lessig use skating as a form of expression. “Skating is a sport of identity. Every skater is different and every skater has a different style. No skaters are completely the same so everyone can express themselves differently,” Lessig said.

Lessig’s favorite trick, which only took her about 30 minutes to learn, is a backside flip. The reason why she got it so quickly wasn’t because of skill she said, but because of the support she had.

“I was at a Skate Like a Girl meet up and there were a bunch of people there supporting everyone, cheering people on and trying new tricks,” Lessig said about the female run skate group. “It was the support that motivated me to commit to landing it.”

Though it may seem so, skating isn’t just about tricks. Many people in the skating community have other interests that they express through skating, such as videography. In the world of skating, there are people with huge cameras and fisheye lenses that follow the skaters’ every move with creative maneuvers to create a cinematic masterpiece.

One Garfield skate videographer is sophomore Owen Allen. He started filming about a year ago on a camera that his friend’s dad gave him for free after realizing that he was “never too good at skating but really enjoyed it,” Allen said. He switched to filming because he wanted to “have something that he could do and enjoy within that community.”

“Filming has a pretty big significance in my life because it is one of my major hobbies. I really like the creativity aspect of how I can imagine how I want a clip done and being able to film it and put it into a video,” Allen said.

About a month ago, Allen produced a 17 minute skating video called Crown Video. Allen and his other friends who skate came together and worked on the video for eight months.

“We made the video because there’s not many people our age making these types of videos right now. So, we wanted to create one to show local kids in the skate scenes abilities,” Allen said. They met many people along the way that all contributed to the video.