How budget cuts led to the loss of three beloved classes 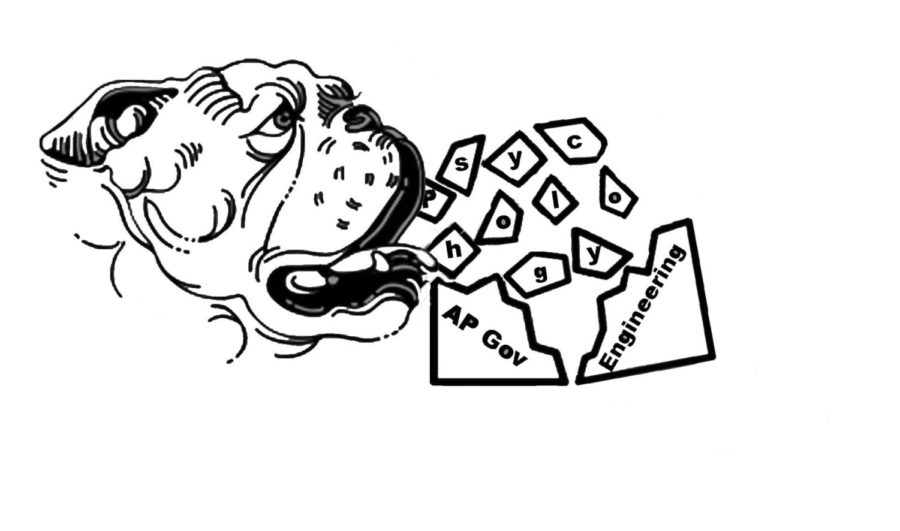 This school year, three previously offered classes are no longer available. These are Psychology, Engineering, and year long AP United States Government. This cut coincides with a history of class cuts that have affected the French, Japanese, and Latin programs, and has led to students being placed in unrequested electives. Psychology, which started in the 2020- 2021 school year following a two-year student push utilizing petitions and pleas to administrators, was one of the classes cut this year.

“Late spring [of last year], after our budget was finalized, [I learned that the class was cut],” Alfred Snyder, former Psychology teacher, said. This cut was evidently not due to low enrollment.

“Eighty – five students requested psychology, so it was one of the highest requested electives. Roughly sixty-six of those students would have
had the class,” Snyder said. In theory, teachers, students, and parents have a say  in determining class offerings. “Technically, the Building Leadership Team (BLT) is supposed to be a liaison between the administration and the building… so we are supposed to approve decisions before they go to [the administration],”

Mary Cohan, one of last year’s two teacher leaders of the BLT, currently looking for student representatives, said. Their influence has not always been present, however.

“Things have been weird since [former principal] Mr. Howard left [at the end of the 2019-2020 school year] since he basically ran the show and it was kind of like we listened,” Cohan said. “Like when Latin got cut, I was kind of oblivious to it and I was on the BLT at the time.”

“The budget is something we do and that is kind of deciding what classes will be served. The annoying thing about the budget is that it’s not big enough. It’s kind of an impossible task,” Cohan said. While the overall school budget did not decrease this year, more of the funding is allotted for special education due to an increase of students in the program.

“There is a [portion of the budget] for special education; based on the number of kids, you get a set number of staff members. That is not flexible: you can’t cut that, you can’t add that. It is what it is,” Erik Burnett, an academic intervention
specialist and part of the school’s data team, said. This year, Garfield’s classroom teachers lost 1.4 full time equivalent employees, and these decreases are not new. “This is my fourth year here, [and] in the three budget cycles I’ve been through previously we had to make cuts… That is where it gets difficult, having done cuts two of the past three years there just isn’t much fat left to cut. At this point, cutting stuff means cutting stuff that is vital,” Burnett said.

“Three years ago, we really prioritized keeping class sizes low and the result was the cuts came from student support services… Last year we had to make cuts, but we as a staff decided that this time we were going to try to cut from teaching staff, because cutting student support staff two consecutive rounds would have been debilitating,” Burnett said.

Budget decreases negatively affect both students and teachers. “Whenever there’s a new class, it’s a huge investment of time on the teacher’s part and it’s a labor of love so it’s not like, ‘woe is me.’ I helped support the students that wanted [Psychology] in the first place and I had open arms taking it on knowing there would be work, but it does add to the frustration,” Synder said.

Following cuts, some students have had to go to far lengths to take the classes they want. “I go to Roosevelt to take Latin 307 which is a class with the University of Washington,” Watson Gerhard, a senior who was enrolled in Latin at Garfield before it was cut last year, said. “I don’t take any other classes there, so afterwards I have a free period to get to Garfield.”

Career Connections was one of the classes added this year, replacing Engineering in the Career and Technical Education category.
The class is taught by Isak Bressler, a long-term substitute teacher. “I was contacted after the school year started… There wasn’t much of a description besides that we would be working on getting to the career that they would choose,” Bressler, who has previously substituted in the Garfield social studies department, said. “Honestly, I had very little time to prepare for this year.” Students too were not given prior notice of being placed in the class. “Speaking to my students, most of them did not sign up for the class,” Bressler said. Students said they had signed up for classes such as French, year-long government, and engineering.

Student grade levels span from 9th to 12th grade which
has led to some challenges. “For some they are working on college applications right now, but for other students they are 9th graders and they are still figuring out high school,” Bressler said.

“I’m trying to not necessarily change the curriculum, but supplement it with a lot more college prep material: help with essay writing, scholarship information, resumes, things that would be beneficial to a career but also be beneficial to more immediate needs of applying to colleges,” Bressler said.

Schoolwide class sizes have increased, with the lowest enrolled core and elective classes having average class sizes of twenty- eight and thirty students, compared to fourteen last year. “This is the most over-enrolled I have seen classes in my twenty-three years of teaching,” Snyder said.

How students and teachers will cope with these changes is yet to be seen. Based on the number of enrolled students compared to the beginning of the year estimate, the district has the ability to retroactively add teaching staff, which could result in more classes being added. Administrators declined to comment on class cuts.