The College Board Apologizes

Is this a publicity stunt? 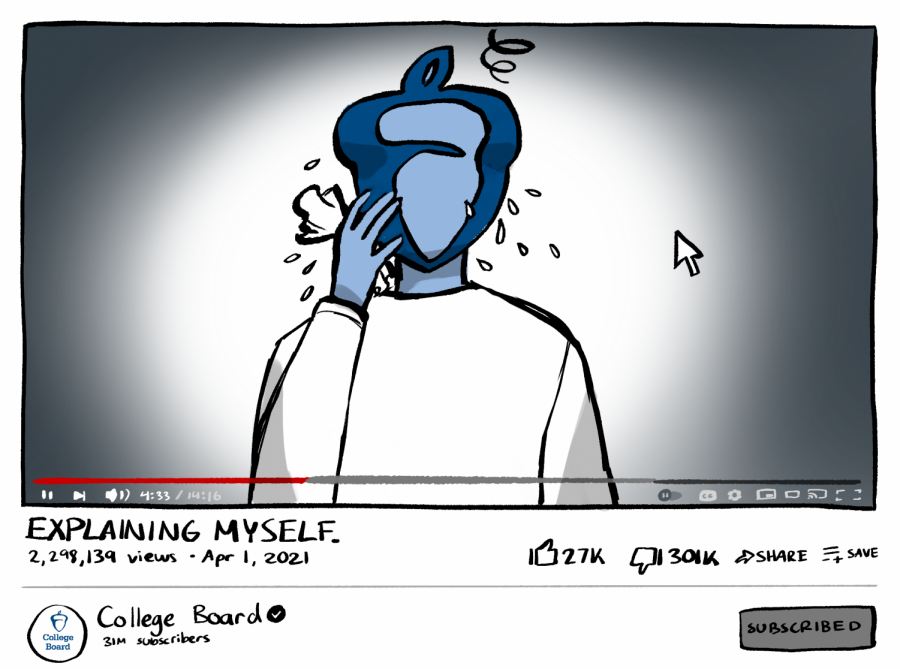 Disclaimer: This is a satirical opinion article, and the sentiments within this piece do not necessarily reflect the Messenger’s views as an organization.

The College Board. The non-profit organization that’s responsible for managing Advanced Placement (AP) classes (which is another way of saying “privileged” classes), the dreaded AP tests, and the exam that determines your chances of getting into college, the SAT.

On April 1st, 2021, the College Board released an apology video on YouTube, titled “So Sorry.” It was a ten minute video of the College Board CEO, David Coleman, wearing an acorn over his head. The video itself checked all the boxes for the stereotypical YouTuber apology. It had massive amounts of crying, three different sponsorship segments, and a 30 second cameo from Coleman’s dog.

In the first 25 seconds of the video, you just hear uncontrollable sobbing, followed by “Students of America, we here at the College Board apologize for our actions for the past couple years. Since our founding in 1899, we, as a non-profit, are dedicated to helping millions of students navigate the transition from high school to college each year through programs like the SAT, AP, and BigFuture. Did I mention that we are the nation’s largest college-prep organization? No, that wasn’t cap, as the kids say.” He then winks at the camera. “We have thought about our actions, and have decided to take the necessary action to prevent these problems.”

Now, what are these problems? Well, the odd thing about this video is that a minute in, a message appeared that read “You must be a subscriber to view the rest of this video.” Oh look, a wild paywall appeared! This shouldn’t be possible, but the College Board somehow managed to big-brain themselves into introducing a paywall into a YouTube video.

If you’re still confused, think of a pay wall as being able to view the ‘hot single moms in your area’, but having to pay to message them.

After paying the outrageous price of $4.20, the rest of the video was finally viewable.

“Last year, in May of 2020, we thought we executed our AP tests pretty well. Turns out, we done goofed. We listened to your complaints. We should’ve extended the submission time for the tests by 20 minutes, and that’s what we’re doing this year. Other than that, we still stand by our decision to condense a 2 hour test into a 45 minute test, and we now charge the low low price of $95. Additionally, we will be offering a $69 online package for anyone who wants to gamble for their chance to get an extra point on the AP tests this year.”

Well now, introducing high schoolers to gambling is the latest trend nowadays. Isn’t that illegal? After this section, three YouTube ads appeared back to back.

“Back in 2019, we were accused of selling our precious student’s personal information to colleges. All I can say is, we, as a company, aren’t greedy,” the College Board said in another statement.

Says the company that charges $102 for one online test that was complete sh*t.

“But hypothetically speaking, if we did sell the information, we would use the money to make your testing experience better. You can have my personal assurance,” the organization continued.

Unfortunately, this reassured no one, as the AP tests in 2020 were complete BS. Condensing a two hour test into 45 minutes, having testing software that won’t let you submit the test, forcing everyone around the world to take the test at the same time, and the whole thing with “Dinosause123” on Reddit.

If you think about it, AP and SAT testing over the years has always stayed the same, so who knows where the money went.

After addressing these two issues, the rest of the video was basically the College Board’s ploy to extend the video to 10 minutes, with ad sponsorships from Board VPN and Acorns: Shadow Legends. One thing to note is the music choice. From the start of the video it was the lofi version of Rick Astley’s hit song, Never Gonna Give You Up, on repeat. There wasn’t really anything else of note in the video, as it was mainly Coleman flaunting the success his company has had to cover up for their mistakes. This apology video might just be one huge RickRoll, in order to “resonate” with the younger generation.

Apology videos are only meant for publicity. Sure, some people might be truly apologetic, but most want to clear their name to look good, and most importantly, for money. The College Board is a good example of this. Actions speak louder than words, so what will the College Board do to not disappoint others again?