A recent string of graffiti has left Garfield students and staff stumped.

On the morning of April 5th, faculty entered our beloved Garfield High School building for the first time in over a year to begin training for school re-opening, and were shocked to find a variety of messages in graffiti on various locations of the school. The Messenger’s staff members Julia Wartman and Avalon Leonard were immediately on the case to investigate the possible culprits. 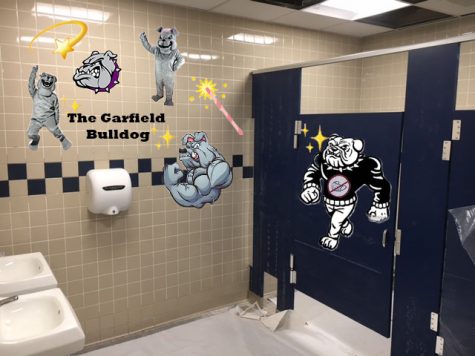 Upon walking in on the girls bathroom, we were shocked to find a shrine in one of the bathroom stalls of none other than our own Garfield mascot.

The collection of images carefully  arranged and decorated might have taken inspiration from the shrines of famous celebrities like Tom Holland and Timothee Chalamet that have been featured on TikTok in recent months. Unlike these more common subjects of adoration though, the Garfield mascot is neither human, or famous (well that second one is debatable) but definitely an unlikely infatuation from the eyes of high school girls.

Clues as to who may have put up the shrine were left behind though, and the culprit of this vandalism is yet to be confirmed. Could it have been the janitor? One of the more frequent visitors of the bathroom could be inclined to make the space more comforting and personably decorated, after all. Or perhaps, with the newest expose on our mascot being an anti-masker,  a secret league of anti-masking students’ interest was peaked. Maybe this was all a prank done by a teacher trying to make fun of the way teenage girls idolize various people, while paying homage to a Garfield fan favorite character? We also can’t help but wonder how these images were acquired, as these unseen photos of the mascot will make you do a double take. Was a private shoot arranged, or is the vandal just great at Photoshop? As we search for answers, we look to our fellow Garfield students for possible insight. Please email us with any info at: [email protected] 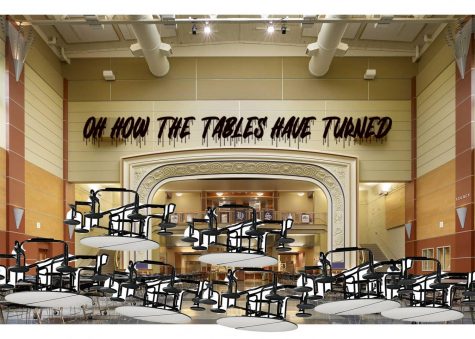 Oh, how the tables have turned. At least that seems to be the message that was being sent when a staff member (who will remain anonymous) walked into the Garfield cafeteria on the morning of April 5th.

When walking in, the faculty member observed several of the cafeteria tables were turned upside-down on the ground, accompanying black paint writing: “Oh how the tables have turned.” It’s nearly impossible to base our suspects for this vandalism off who was in the building at the time, since multiple staff members were on campus for in-person training.

We then must look for a motive. Could it have been another school in the area? If someone from another school was responsible, they could have been bitter over a recent loss from one of Garfield’s stellar sports teams and wanted –just once — to gain the upper hand and turn the whole Garfield community upside down. It could have also come from teachers who are frustrated with being forced to come back and wanting to show some semblance of control to the district. Perhaps they knew this very story would come out…

Also on the morning of April 5th, teachers observed a piece of graffiti that maybe put a few things into perspective for students and faculty alike on where we direct our attention. The sign at the front of the school which usually says simply “Garfield High School” along with the address, had a piece of text attached that said “has a remarkably successful chess and debate team that no one talks about.” While it would be easy to point the finger at the chess and debate team for this, it should be acknowledged that the respective teams could have their own secret, very passionate fanbase that feels very strongly about how they deserve more recognition for their accomplishments. However,

As football season has started back up, we heard through the grapevine that Garfield is doing fairly well against other teams in games. The vandalism on our scoreboard is perhaps a sign of this. Graffiti scribbled over the numbers writes, “Garfield, don’t be so cocky, none of the student body even comes to games to know if you are good or not”. As the competition begins to grow between schools, we are sensing some jealousy from some sore losers. While they may be bitter losers who wrote this, they unfortunately were not wrong (remembering the time someone had to start an entire club to get people to come to games). Our investigation has led us, for the first time in…ever?, to look into the Garfield football standings. While our past hasn’t always been flawless, the Garfield football team has had a great season start, winning their game against blank. It is almost certain that this graffiti came from this other high school. We don’t want revenge, for we won before the beef even started, we just want accountability… The ball is in your court… or football field. 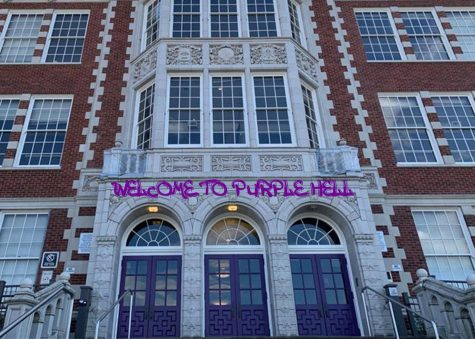 Welcome back bulldogs! Purple hell will become reality as students will be making their way to the building for in-person school starting April 19th according to the graffiti written above the main doors writing “Welcome to purple hell”.  This last push of online learning has been tough: waking up at 8:59, staying in sweats all day, and not having to say a single word in class … I agree it has been exhausting. But it may get so much worse when we have to get dressed and engage with others for school. Maybe the vandals weren’t that wrong. The graffiti may have come as a warning from a staff member, maybe a student plotting a back to school surprise…? The DNA tests have yet to come back but until then, we can’t wait to see all your beautiful eyes and eyebrows soon, purple hell just might be a blast!