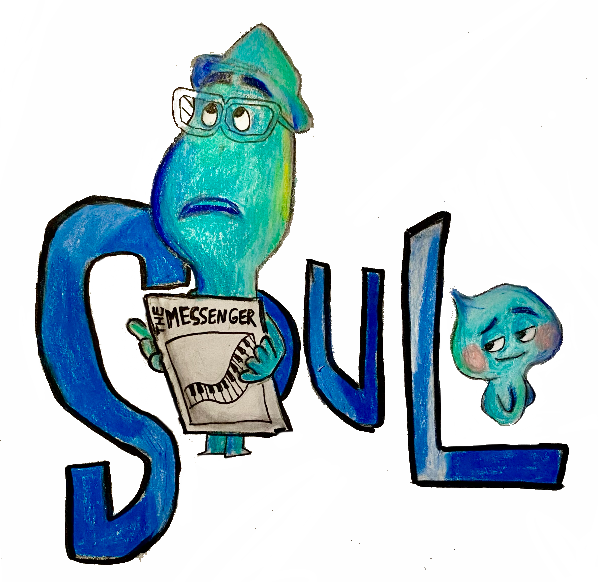 Disney-Pixar’s Soul is a brilliantly inspiring film that takes its viewers on a journey towards self-discovery and purpose. The film is a reminder to live in the present while we still can, and could move absolutely anyone to tears.

It follows the life and almost immediate death of Joe Gardner, voiced by Jamie Foxx, a part-time middle school band teacher with dreams to be a successful jazz piano musician. Joe is offered a full-time position as the band teacher but couldn’t be more disappointed with how his life is going. He had dreams to play with the greats, not teach ungrateful middle-schoolers how to carry a tune.

Just as Joe thinks he’s trapped in this underwhelming lifestyle, an amazing opportunity arrives to play alongside famous saxophonist Dorothea Williams. Things start to look up, and then promptly down when he falls into a manhole to his death. This could have been his big break as musician, but his life was cut short before he was given the chance.

Afraid of the “great beyond,” where all souls go when they die on Earth, Joe runs away and finds himself lost in the “great before,” the place where souls get their personalities and sparks before going to be born on Earth. There he meets soul number 22, who is different because she doesn’t desire to be on Earth. These two are willing to help each other get what they both want: for Joe, it’s getting back on Earth and for 22, it’s staying in the “great before.” Things (of course) go wrong and they end up trapped in the wrong bodies. Now Joe and 22 have to learn about life, each other, and themselves in order to return things back to normal.

The music is the main theme of the movie and it’s such an important aspect. Not only does it add literal “soul” to the film by putting the viewer right into New York City’s jazz scene, but it offers new perspectives about success, life, and purpose. Joe knows that playing the piano is his passion, but he also believes it’s his purpose. He thought that if he could make it big as an artist, his life would be fulfilled. But Soul tells us that success alone isn’t what gives life meaning. It’s living in every moment, enjoying the beautiful and the ugly.

Both Joe and 22 are relatable characters. Like Joe, we may have a trajectory for our lives, and any sort of diversion appears to be failure. Like 22, at times it can feel like we are constantly searching for the meaning in our lives, but there are other times where we can clearly see why life is so worth living.

Soul received some criticism for not letting their Black lead character stay in human form long enough. Similar to Disney’s The Princess and the Frog, where the main characters are frogs for the majority of the movie, it seems that animators have a trend of robbing the main protagonists of color of their screen time. Peter Bradshaw, a British critic wrote about Soul that, “Disney may wish to reach out to people of color–but the color green wasn’t what we had in mind.”

Even still, the characters are animated elegantly with very prominent attention to detail. The barbershop scene is strikingly memorable for its realistic dialogue and cultural significance. Lead Jamie Foxx was reportedly adamant about getting this scene right because of how it would make black communities all over the world feel recognized and represented.

Pixar has a way of fitting mature themes into their films that are mostly targeted at kids. In the case of Soul, these mature themes were amplified to the point where adults can relate to the movie and its messages on a deeper level. However, it still manages to keep that Pixar magic alive for all ages can enjoy.