The role of sports in a consequential year for social justice. 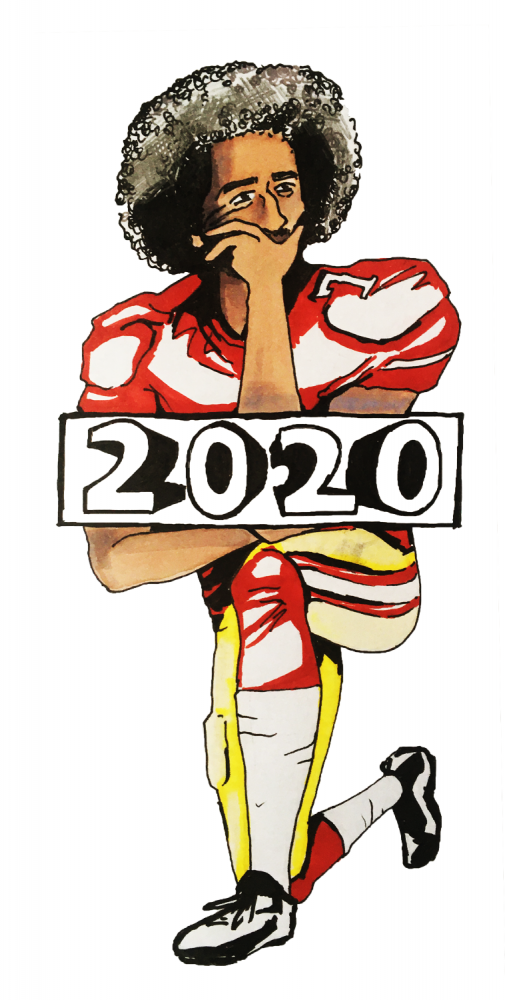 When former San Francisco 49ers quarterback Colin Kaepernick first took a knee during the national anthem before an NFL game in 2016, he faced immense criticism and was forced out of the league shortly after. Although he received much hate for the act, he accomplished his goal of bringing light to the issue of police brutality in America.

2020 was a milestone year for social justice, with nationwide protests and activism leading to some meaningful change in the United States. Although it has been long overdue, the sports world is beginning to join the cause.

The National Football League’s new Rooney Rule exemplifies this shift. In May of 2020, the league announced the new rule, which rewarded teams that developed minority coaches with future draft picks. Despite the large majority of NFL players being Black, just three teams currently have a minority head coach. The same can be said for the number of minority general managers also in the league.

Major League Baseball also got in on the action with two announcements late last year. In December, the league announced the inclusion of the Negro Leagues into Major League history, although the move has critics on both sides of the aisle. The second announcement, also in December, came from Cleveland where the team declared their intention to move on from the name “Indians” after 105 years of use. It follows the move by a fellow racist team name The (formerly) Washington Redskins, now the Washington Football Team. After years of pushback from the indigenous community and their supporters, the team finally gave in.

Of course, these events did not come without pushback from the conservative parts of their fanbases. As has always happened any new move, especially a progressive one, there was controversy surrounding each decision. However, what has changed recently is that the sports institutions did not shy away from the criticism to appease the angry mobs, but instead made the correct decision to move forward.

In this past year not only have the leagues changed during this year of social justice, but so have the players. Back in 2016 when Kaepernick first took a knee, teammate Eric Reid was the only other player to join him in his protest. Reid, like Kaepernick, is out of the league despite having the talent to be on an NFL roster. Now, looking back to last summer during the peak of the social justice protests, the MLB, NHL, and MLS players took a knee just like Kaepernick. Entire NBA, WNBA, and NWSL teams took knees as well. In just four years, players have found themselves more able to use their platform as an athlete to protest and bring awareness to issues without having to fear for their future in sports. The same critics were just as loud as before, but now, players rose to the occasion and took a stand.

Just like the rest of society, sports still have a long way to go to reach the equality, justice, and equity that is necessary. 2020 showed that even the most cautious parts of society can and will change for the better.