The work for racial equity in SPS. 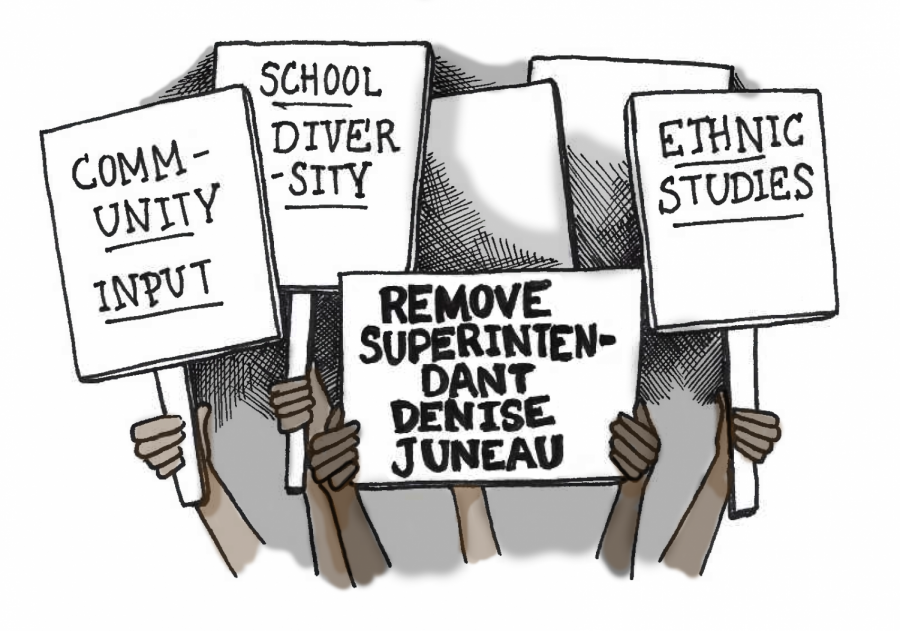 Students, community members, and local NAACP chapters have called for the termination of Seattle Public Schools superintendent Denise Juneau’s contract, which faces a renewal vote in December. In a press conference held by Seattle’s NAACP chapter, many brought up the lack of implementation of ethnic studies in schools, the removal of seven African-American men from leadership positions, and a disregard for community voices.

One of the main systems for community input is the Student Advisory Board, a group of students from each high school that meet monthly with the superintendent.

Tylor McClure, a sophomore and one of Garfield’s two representatives, noted that, “There are mostly students of color on the board and it’s really focused on getting our input on things, which is one of the reasons I really wanted to join because I wanted to have more of a voice as a POC woman.”

The advisory board application highlights this as well, encouraging “students furthest from educational justice” to apply.

The advisory board faced criticism from former member Reana Mateja Walker Burr at the October 20th press conference held by the Seattle King County NAACP, stating, “Nothing would get done, I felt like we were checkboxes to her so she could say she had student representation.”

McClure acknowledged that she has only been to one meeting so far but said that, “In our first meeting we talked about students voices and them being heard,” and noted that in the past, the advisory board made a large impact in the rescindment of the school dress code.

Dr. Keisha Scarlett, a Garfield High School alumni, is the Chief of Equity, Partnerships & Engagement for SPS and reports directly to the superintendent. She said that she met with the NAACP youth council recently and discussed hires in the ethnic studies program.

“One of the things we are really working on is the newly established office of African American Male Achievement that Superintendent Juneau established in the 2019-2020 school year,” Scarlett said.

“They are out in the field doing interviews, they have plans to do 500 interviews,” said Scarlett. “Individual interviews focused, with our young Kings, our African American boys and young men, on asking them what are their values and interests… and what needs to change in order to help them be successful.”

The office of African American Male Achievement also assembled a Student Leadership Council in their first year in 2019, and leads the Kingmakers program, an elective currently available at six schools, whose curriculum “Emphasizes black history, cultural knowledge, positive self-identity, literacy and academic mentoring,” according to a 2019 Seattle Times article.

On the issue of staff diversity in SPS, Scarlett said, “That is a really important priority in alignment with our strategic plan.”

“We are taking a longview approach to this, these things don’t happen in a vacuum, so we have a number of initiatives in place,”  Scarlett said. One of those is the Academy of Rising Educators, which works to funnel SPS students to become teachers. 89 candidates this year are people of color.

“There are multi-departmental efforts to increase recruitment, hiring, and retention of staff of color, particularly teachers of color,” said Scarlett.

This approach to increasing workforce diversity seems to be working as, “Thirty-six percent of all new classroom teachers hired from the 2020-2021 school year were educators of color,” said Scarlett, which is a nine percent increase from the year before.

Ethnic studies is another point of discussion that has long been talked about in Seattle. This year, there are four high schools offering the program: Roosevelt, Rainier Beach, Cleveland, and Garfield, with Franklin offering an ELA program with African-American and Native-American literature. This is a far cry from the mandatory ethnic studies that the Seattle NAACP called for in 2017.

“There are a lot of people who are investing a lot of time in advocacy and seeing very little return in investment,” Scarlett said. “If we say we are starting classes for ethnic studies or black studies or we are going to have these different programs, then people shouldn’t have to look to us and say why haven’t these things started.”

“Ethnic studies gives students opportunities to see themselves in curriculum and to be able to understand the stories of multiple cultures, particularly marginalized people and people of color,” Scarlett said, stating that she is working in partnership with the chief academic officer to “lift [the program] up and give it more strength and power to mobilize and move forward the ethnic studies work.”

Overall, community representation has student critics and supporters, with Scarlett outlining plans to increase the voices of community and student stakeholders in decision making. Teacher diversity is increasing based on this year’s data, and plans are focused on similar sustained incremental increases. Ethnic studies is currently at four schools with the stated goal of expanding it this school year. Future events of interest include the display of upcoming racial equity policy 0040, which outlines and guides the district’s work in the future around racial equity, and a vote on the renewal of the superintendent’s contract both happening in December. No board members have publicly expressed how they plan to vote on Juneau’s contract and Zachary DeWolf, Garfield’s district representative, refused to comment on how he was planning on voting.

“More and more our biggest challenge and unpacked potential is unleashing the brilliance of our young people,” Scarlett said. “You all are the recipients of all the things we say we are doing and so there is no one with more vested interest and more brilliance. You are actually a lot smarter than us adults about what needs to happen in our schools every single day.”

The Messenger would also like to express its condolences for the loss of William Juneau, Denise Juneau’s father, from COVID-19 on November 3rd.