The many rewards of creative projects. 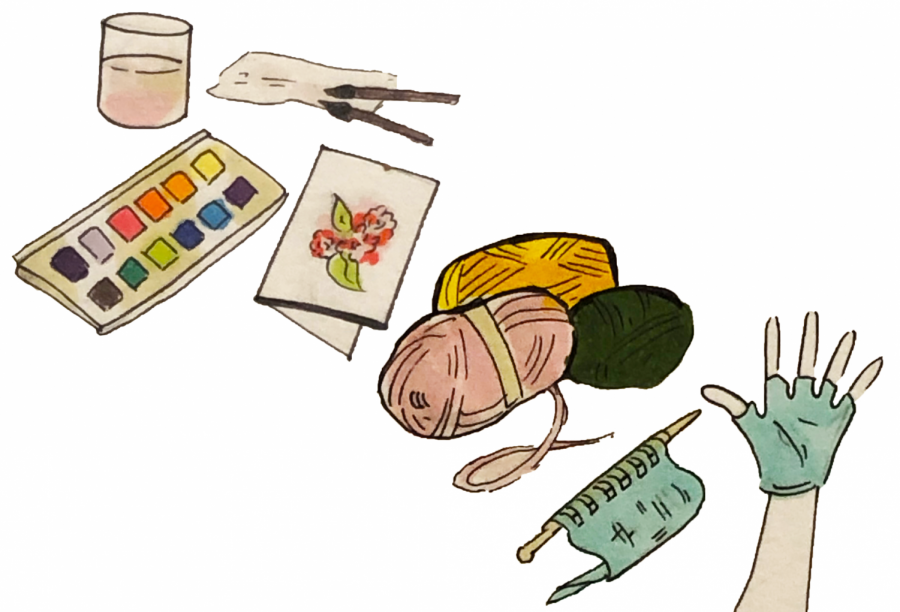 From knitters to painters to jewelry makers, Garfield’s student body is full of creative students who find time to practice their unique skills. As a creative outlet, crafting has become an important part of many students’ lives, especially during the Coronavirus pandemic.

Many student crafters have taken advantage of the extra time stuck at home to be creative. Aine Wilder, a member of the Garfield Knitting club who enjoys crocheting, knitting, collage, and embroidery, said though the difficulty of the pandemic sometimes took a toll on their creativity, social distancing gave them the ability to focus more on crafting.

“It gave me a lot more time to craft and really delve into things. Before lockdown, the only time I could work was weekends and bus rides, and it’s hard to get much done on both,” Wilder said.

Natalie Dresdner, a junior at Garfield who has enjoyed watercolor painting, drawing, and gardening for as long as she can remember, also found she had more time to craft while social distancing and was inspired to use that time to make things for other people.

“With lockdown and not being able to see people like normal, I did a lot of crafting, making cards to send to friends and family. I also did some gardening over lockdown/social distancing and gave flowers away to friends and neighbors,” Dresdner said. “Dropping off bouquets of flowers was really impactful because it made people so happy which I think was important during lockdown, and people would tell me things like that they had just gotten home from a long hard day of work and were doing their daily complaining, and that the flowers made their day.”

The process of crafting can be rewarding on its own as well. Wilder thinks it’s important for students to have a creative outlet, especially during the pandemic.

“Not only is it a unique way for people to express themselves in ways they can’t usually, but the joy of putting time and effort into a project and seeing it after you’re done is such a special, specific feeling that I don’t think you can get anywhere else,” Wilder said. “It can be scary trying something new because it could turn out awful, but that’s another thing crafting helps with.”

Crafting can also be a good mental break from school work. Dresdner says that although school work takes up a lot of her day, she tries to put aside some time to be creative.

“There is always something I can be doing for schoolwork, but I think that sometimes it is important to take a break and do something fun too.”

Wilder has considered finding some way to sell their crafts but believes it’s good to be creative just for the sake of the happiness it brings them. Wilder doesn’t want to take away the fun of crafting by adding extra stress and planning to the process and thinks of this as a small act of rebellion.

“Not selling a creation, but rather keeping it as something you can sometimes look at and be happy that you made it, or giving it to friends and family, is yet another act of defiance against a world that thrives on capitalism.”