An in depth overview of the issues. 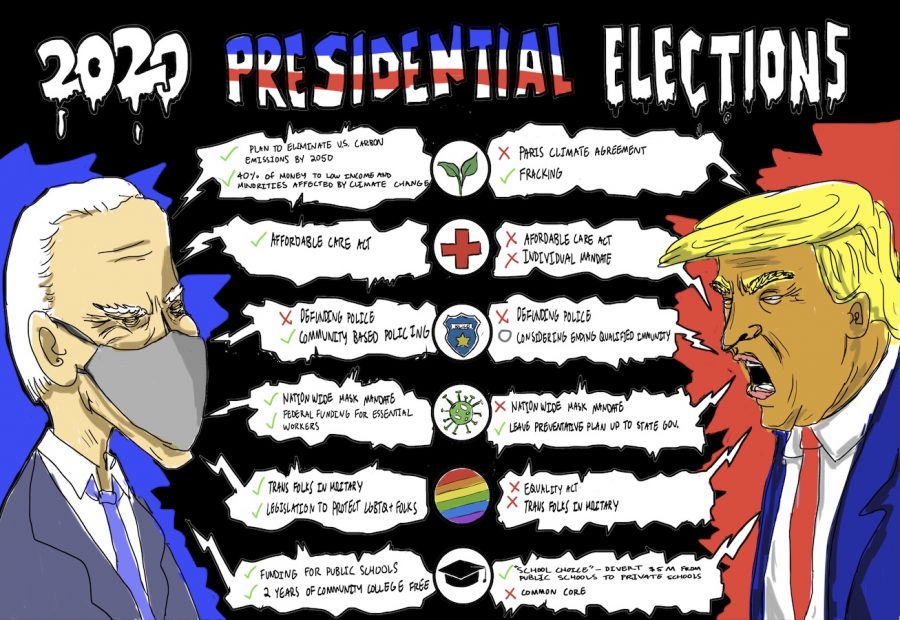 As future and first-time voters, it’s imperative to be educated about the process and impacts of the election. This guide addresses each presidential candidate’s stance on 12 different topics that encompass subject matter highlighted during the debates this year. The purpose of this guide is to clearly describe these issues with accessibility in mind, not to take sides or inspire a directed opinion for readers.

Climate Change
Trump announced that the U.S. would withdraw from the Paris Climate Agreement, which was created with the aim of keeping the global temperature increase to less than 2 degrees Celsius above the pre-industrial era levels. While he has supported the cleaning of oceans, his stance on whether climate change exists is shaky/unclear, implying that humans aren’t as much of a threat to the environment as scientists are making us out to be. He strongly supports fracking because of the jobs it provides.
Biden proposed a plan for climate change that involves the total elimination of carbon emissions in the U.S. by 2050, and the retraction of carbon pollution from the energy sector by 2035. His plan includes a $2 trillion investment in clean energy, green transportation, and sustainable housing. He also addressed environmental justice, promising  to devote 40% of the money to low income and minority communities that have been disproportionately affected by climate change, while penalizing the corporations that have caused such damage. Biden wants to rejoin the Paris Climate Accord.

Healthcare
Trump has been attempting to derail the Affordable Care Act, which lowered healthcare costs for anyone making less than 400% of the federal poverty level, since his election. Despite his inability to do so in 2017, he has been chipping away at it since. In 2018, the individual mandate was thrown away, which was designed to financially penalize anyone who didn’t obtain health insurance. This mandate made healthcare obligatory for healthy people, which keeps premium costs down.
Biden was a part of the Obama Administration that enacted the ACA. He believes that undocumented immigrants should be able to buy insurance on the ACA but should be ineligible for subsidies. His idea for a public plan involving Medicare and Medicaid would expand coverage to older people, but critics worry that it could be bad for the economy because of how much the current healthcare system means to it.

Criminal Justice
Trump is against the federal legalization of marijuana, and believes that this should be left up to state jurisdiction. He strongly supports the death penalty and has stated that torture “absolutely works” in reference to a CIA investigation. The First Step Act, designed to reduce jail sentences and minimize incarceration related disparities, was signed by the president in 2018.
Biden proposes that drug use alone shouldn’t be a criminal offense, users should be redirected to a drug court or treatment center – also known as decriminalization. He wants to “root out” the disparities in the criminal justice system based on race, income, and gender. Biden’s criminal justice plan states that the death penalty should be eradicated due to the irreversible errors that could be made within the justice system. Biden advocates for the passing of the SAFE Justice Act, which will reduce the population of prisons by focusing on making arrests on violent crimes as opposed to drug offenses.

Police Reform
Trump is avidly against defunding the police and believes law enforcement officers are doing a great job. He is considering the idea of ending qualified immunity – the principle stating that government officials are exempt from lawsuits based on harmful acts if the constitutional rights of a person haven’t been violated.
Biden doesn’t support defunding the police but believes we need to reform the current policing system, calling for a change to the way that officers are trained and taught. Instead of the concept of defunding the police and using the money to promote community organizations, he would allocate $300 million on community based policing initiatives.

COVID-19 Plan
Trump has opposed a nationwide mask mandate and turned the decisions over to state governments to determine the conditions implemented to stop the spread. He supports the re-opening of schools. Trump’s plan left it up to the states to plan for COVID testing.
Biden supports the nationwide mask mandate and says he would provide federally funded tests for all essential workers. He also is in favor of adopting nationwide contact-tracing.

Immigration
ICE raids have increased under the Trump administration, beginning at the early end of his presidency. In 2017, he restricted travel to the United States from Middle Eastern and North African countries in an effort to diminish potential opportunities that he believes   “present an unacceptable danger to our country.” Trump has voiced opinions strongly against the DACA program, with the 2018 attempt to end it altogether. He has expressed concerns surrounding the safety of sanctuary cities, saying that they harbor criminals.
Biden’s plan prioritizes the reunification of families separated at the border. His first step would be reversing the Trump administration’s actions that have prevented asylum-seekers from safely entering the US, specifically reinstating the DACA program that legally protects undocumented immigrants that were brought to the US as children. Biden also plans to reform the visa system, giving those with work visas more flexibility in their jobs in hope that they would be able to exercise their labor rights – such as participation in a union – with more freedom.

Gun control
Trump has sent mixed signals about his support for background checks and does not have a clear plan to address gun violence in America. He has said that he does not support limits on gun ownership and argues that gun ownership makes the United States safer. He has also said that he believes mass shootings are a mental health problem and he will support legislation to help what he believes to be a “huge mental health problem,” in America. Trump also says he opposes people on the terrorist-watch list being able to purchase guns. Donald Trump is endorsed by the NRA (National Rifle Association).
The “Biden plan to end our gun violence epidemic” details plans to ban the manufacturing and sale of assault weapons, require background checks for all gun sales, end all online sales of guns and ammunition, close loopholes that allow potentially dangerous people to get guns, and institute many other regulations and incentives to limit gun violence. The Biden Plan also lays out plans to support survivors of gun violence.

Abortion
Trump has said he supports banning abortion except for in cases of rape, incest, or danger to the mother. He has cut millions of dollars in federal funding from Planned Parenthood and has taken steps that could help to overturn Roe v. Wade such as putting pro-life justices on the Supreme Court, including Amy Coney Barrett, who Trump has nominated to replace the late Justice Ginsberg. When asked if a 6-3 conservative majority on the Supreme Court would, “rule on a life issue,” he said, “it’s certainly possible.”
The Biden Plan pledges to protect the right to abortion by restoring federal Planned Parenthood funding, expanding access to contraception, and codifying Roe vs. Wade, which would make a pregnant person’s right to get an abortion a federal law. Biden also wants to rescind Trump’s ‘Mexico City Policy” or ‘global gag rule,” which limits U.S. funding and support to global health organizations who provide abortions. Biden is endorsed by Planned Parenthood.

Economy
Trump’s “America First” economic policies mainly consist of corporate and individual tax cuts and trade protectionism, especially through tariffs on China. Trump’s 2017 Tax Cuts and Jobs Act included lowering the corporate tax rate from 35% to 21%, repealing the individual mandate for the Affordable Care Act, and reducing the amount of estates affected by the Estate tax (a tax on the value of an estate’s assets that only about the top 0.2 wealthiest Americans have to pay). The Tax Cuts and Jobs Act also instituted Opportunity zones, which offer preferential tax treatment in certain areas in order to incentivize investments in communities who are struggling economically.
The Biden Plan promises to not raise taxes on anyone who makes less than $400,000 a year, and to increase taxes on wealthy Americans and large corporations. The Biden plan includes a “plan to ensure the future is ‘Made in all of America’ by all of America’s workers” which lays out plans to support American manufacturers, invest $300 billion into research and development, and ensure that the government is investing in “all of America,” without discrimination. Biden also calls for the reform of the Opportunity Zone Tax Deferral, which he says is being exploited by billionaires and could be used to better support black and brown communities. The plan also states that he supports a federal $15 minimum wage for all workers.

LGBTQ+ rights
During his time in office, Trump has worked to pass legislation that undermines the rights of LGBTQ+ Americans. Trump has tried to reduce many protections for the LGBTQ+ community, including voting against The Equality Act, which guarantees protections for LGBTQ+ individuals, instituting a ban that prohibited transgender people from serving in the military, and choosing anti-LGBTQ+ judges for a third of his federal court nominations, according to a 2019 study by Lamda Legal, a LGBTQ civil rights group.
The Biden Plan outlines a plan to protect LGBTQ+ people from discrimination. The plan includes reversing Trump’s ban on transgender people serving in the military, creating legislation to protect LGBTQ+ youth, and protecting LGBTQ+ individuals from violence. Biden says he will prioritize ending the epidemic of violence against transgender women of color in his first 100 days.

Racial equality
Trump has recently released the “Platinum Plan for Black America,” which details plans to classify the KKK and Antifa as terrorist organizations, make Juneteenth a national holiday, and support black-owned businesses. During his time in office, Trump has issued a travel ban on predominantly Muslim countries, tried to stop anti-racism trainings (calling them, “anti-American propaganda”), and overturned an Obama-era housing rule aimed to fight racial housing inequality. Trump does not support the Black Lives Matter movement and has called a BLM mural “a symbol of hate.”
The Biden Plan contains several comprehensive categories aimed at dismantling systemic racial inequality in America. It outlines plans to advance economic racial equity, end racial health disparities, address environmental justice, expand access to education, and other legislation aimed at promoting racial equity. On day one in office, Biden says he will rescind Trump’s travel ban on predominantly Muslim countries. Biden promises to protect the rights of tribal nations, and work to end the epidemic of violence against native women. Biden says he would work to create a Smithsonian National American Museum to celebrate Latino culture in America.

The presidential election is on November 3rd. For information about how to vote, you can visit https://howto.vote/vote/en/wa.html.