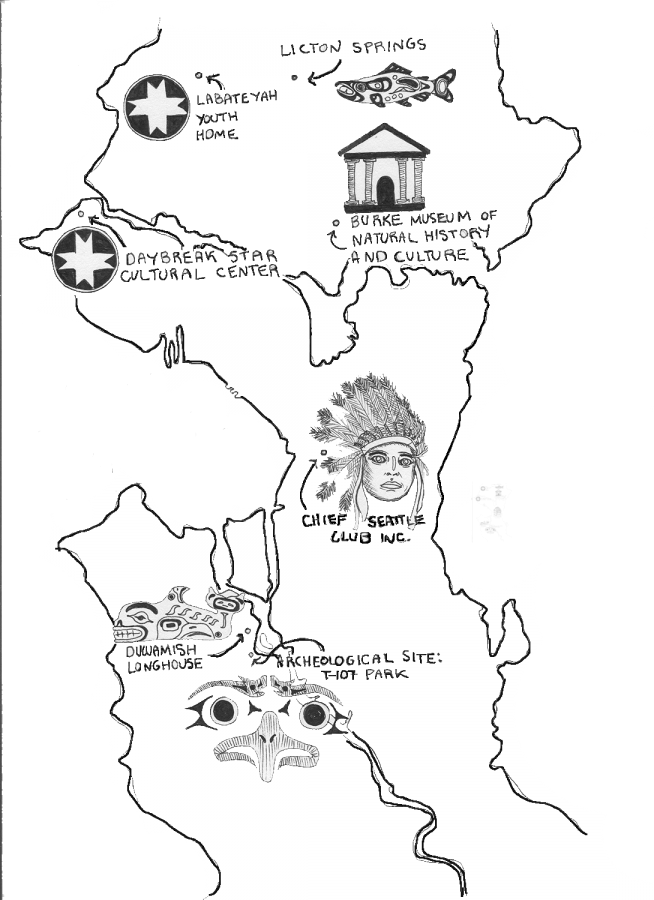 This is a graphically-heavy piece. For the full experience, read this article in the flipbook at garfieldmessenger.org

“We are a grassroots volunteer-based 501c3 nonprofit. It’s a native lead and student centered organization. We are grassroots and we haven’t diverged from that at all. Our focus is to advocate and to support our native learners through our programs, the Seattle Clear Sky Native Youth Council and Native Warrior Athletics.”-Sarah Sense-Wilson, UNEA cofounder and board member

“UNEA received an email from John Halfacre (the area director) saying that they were terminating our partnership. So as things stand right now, there is a lawsuit against the Seattle Public Schools for lack of due process discrimination. We just recently were able to establish a partnership with the North Seattle College. So we relocated. It was a huge disruption.”

“Our native students already have disadvantages and a lot of complicated issues that stem from historical trauma, and intergenerational transmission of unresolved grief and loss, and poverty and homelessness and a whole number of challenges, so to not have the Clear Sky [tutoring and mentorship program] as a resource twice a week has really had a big impact on our community and on our students.”

“A lot of our families are homeless and it felt like they were being double-evicted. A program that serves a holistic approach for supporting native students was being evicted without legitimate reason. This is Duwamish territory, Suquamish, Snoqualmie, Muckleshoot, Tulalip, and yet our communities are urban Indians and we experience so much struggle and strife and displacement. The invisibility is still there. Having a festival or activity or event, that’s great and all, but a one day thing doesn’t necessarily have an impact.”

A mineral spring sacred to the Duwamish people, named in Salish for the red mud of the water. Licton Springs K-8 School used to be the site of Urban Native Education Alliance, before their recent eviction by Seattle Public Schools.
“Licton Springs was an important place of origin for our youth because of the historical significance and the cultural memory. The Licton spring is an important site. We were really looking forward to revitalizing it and restoring it and bringing more signage that’s respectful of the history, and provides the history in Lushootseed.” -Sarah Sense-Wilson

”The longhouse is super important. It’s something the tribe has wanted since the early 70’s. When we were fighting for federal recognition, the number one priority besides that was always a place to gather and have a home for the Duwamish people.”-Jolene Haas, Duwamish Longhouse Director

“They found an archeological site next to the river, across the street from where the longhouse is now, and they dug a bunch of artifacts up from the ground. Since that’s known to be the site of a Duwamish village, we came forward to get those artifacts, but they said, these belong in the Burke museum, you can have them when there’s a cultural center. So we had to get a longhouse built to display those artifacts and interpret them. We succeeded in not letting them build anything on that site, and now it’s on the National Register of historic places.” -Jolene Haas

HOW CAN NON-NATIVES BE BETTER ALLIES?

“Visit reservations and attend their events that are open to the public. Seek more knowledge then what your school curriculum offers. Learn about our struggles and triumphs and all that we have had to overcome since we signed the treaties with the United States.”

“Learning to be a good ally [means] immersing in our community. That might mean volunteering, it might mean some kind of mentorship, stuffing envelopes, showing up at rallies and demonstrations, or donating money. There’s a variety of ways people can lend their support beyond the land acknowledgement. A lot of non-natives get caught up in the romanticized view of natives  and they want to go to a longhouse or a museum as observers but they don’t want to actually help cook for a community event.“