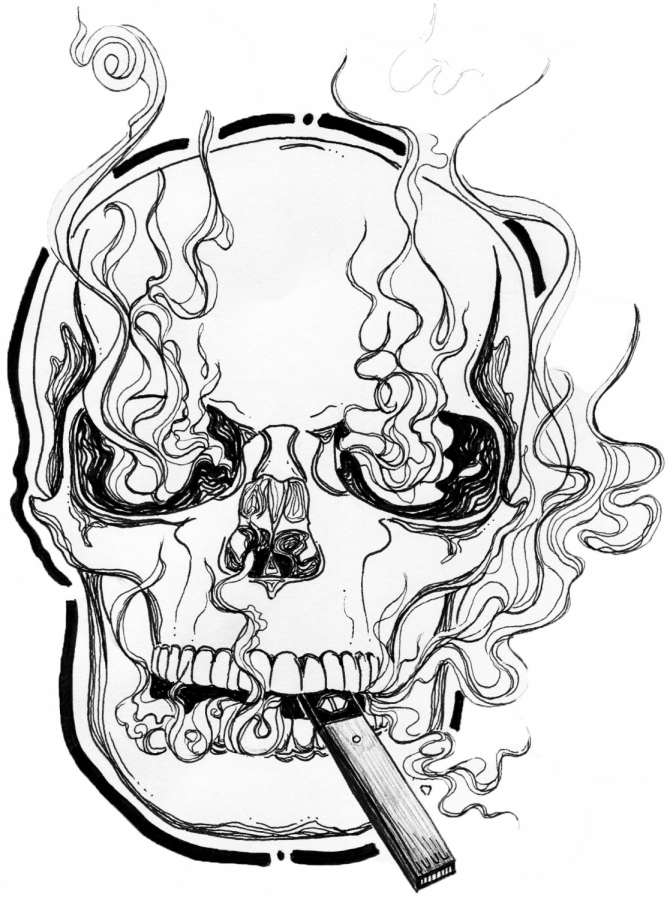 Within the last few months, it seems like vaping has taken over every news platform. Every day there is another story about a teen in the hospital or a vaping product in the process of being banned. However, this isn’t the first time vaping or e-cigarettes has been in the news.
Vaping first became popular in 2015 as an alternative for those trying to quit regular cigarettes. Instead of using a patch or chewing gum, e-cigarettes give the same feeling of smoking without some of the negatives like smell and terminal illnesses. Out of hundreds of e-cigarette manufacturers, Juul was immediately one of the most popular, due to their sleek, compact design and their wide variety of flavors. However, their fruity flavors started to entice not only those breaking their addiction, but also teenagers who had never smoked before.
In response to the concerns of parents and teachers, the e-cigarette brand made news headlines in 2018 as they attempted to put a stop to teen vaping by discontinuing the fruit flavored nicotine pods in brick-and-mortar stores. However, Juul would continue to sell these flavors in tobacco and smoke shops, where one must be twenty-one and up to buy the products.
Unfortunately, Juul’s attempt at preventing teen vaping failed. The epidemic continues to spread and new information about vaping related diseases and death is published every day. However, there are still many unanswered questions about this outbreak and what can be done to stop it. Due to the lack of answers, many states, are beginning to take matters into their own hand.
In the state of Washington, health officials have declared lung illnesses related to vaping a statewide outbreak. To date, there have been seven vaping-related lung illness cases in Washington. Two of the seven cases have been teen patients and the rest have been between ages 20 and 39. All of them reported vaping prior to contracting the illness, but health officials have yet to identify a common vape product between all seven cases.
In the United States, over 1,000 people have contracted a lung related illness due to vaping, including both nicotine and THC products. The illnesses differ from patient to patient, but they all have similar symptoms, such as coughing, nausea, chest pain, vomiting, difficulty breathing and shortness of breath. Because this epidemic is growing at such a rapid pace and none of the patients use the same products, doctors are unable to conclude what specifically is causing the illness.
Recently, scientists and doctors discovered that, contrary to popular belief, the majority of the illnesses are a result of using bootleg or counterfeit THC vape cartridges, not e-cigarettes. Many bootleg cartridges include deadly chemicals such as Vitamin E acetate which is an oil used on the skin and can significantly damage the lungs when inhaled. However, this is just one suspicion and there are many other deadly suspected chemicals in these products. These cartridges are usually sold on the black market for a cheaper price, which combined with the lack of necessary identification needed, makes these deadly products more accessible to teenagers. To avoid these risks, the only place those 21 and over should purchase THC products is at a licensed dispensary.
As a response to this outbreak, Washington governor Jay Inslee has announced an executive order that will push Washington to take action by banning all flavored vaping products, including those containing THC.
Eventually, Inslee plans on working with the health department on a legislation that will require e-cigarette distributors to include all of the ingredients in their products.
“We are interested in ensuring that adults and young people have known and regulated ingredients in vaping products,” Gov. Jay Inslee said. “Everyone deserves to know what is in the vaping liquid they are inhaling into their lungs.” One of Inslee’s main goals is to remove the fruity flavors from e-cigarettes — a feature that makes vaping more attractive to people under the age of 21. “We also want to make sure that no young people get hooked on vaping and one way they get hooked early is through flavors.”
On a wider scale, President Donald Trump has also announced his plans to ban flavored e-cigarettes. However, there has been no national plan so far to regulate THC cartridges.
In the meantime, until there are answers, it’s important to stay safe and stay away from all vaping products. Especially if they don’t come from a licensed dispensary.