What does the partial government shutdown mean for the Seattle community? 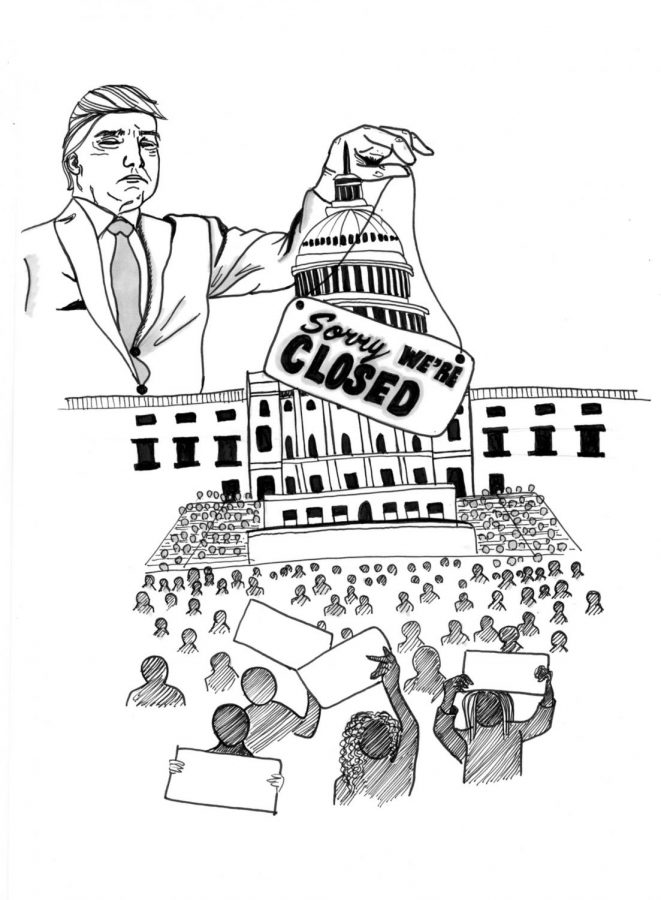 35 days and counting, we are currently in the longest government shutdown in United States history.
The U.S. entered into a partial government shutdown on December 22nd when Congress and President Trump failed to reach a budget agreement. Since then, Trump has refused to compromise on his demand for a $5.7 billion wall on the southern border despite firm opposition from Democrats.
While Washington D.C. remains in a political stalemate, the scope of the shutdown has extended across the nation, and its effects are being felt right here in Seattle.
800,000 federal workers—including 11,000 in Washington state—are affected by the shutdown. Those deemed “essential” are working without pay, while others have been furloughed— meaning they’ve been placed on temporary leave.
The President’s threat that the shutdown could last for “months or even years,” has left many across the country anxious about surviving without their regular income.
Federal employees are finding themselves short on rent and grocery bills, worried about mortgage and credit card payments, and unable to afford childcare. TSA workers at prominent airports are calling in sick, creating long wait times and travel backups. This isn’t the case yet at SeaTac Airport, according to the Media and Public Affairs’ Manager, Perry Cooper.
“Things are going really well so far, we’re not seeing wait times go up,” Cooper said.
However, if TSA workers continue to miss paychecks, Cooper anticipates that SeaTac could face challenges.
“Workers may start seeing it in their pocket book and looking for a part-time job,” Cooper said.
Low-income housing is also threatened by the shutdown. The Seattle Housing Alliance serves about 34,000 low-income tenants, a majority of whom are dependent on federal funding.
The Department of Housing and Urban Development has assured housing authorities that it can continue payments for low-income housing through February. Without funding in March, landlords would be legally allowed to evict tenants, pushing housing providers into an emergency budget situation, according to Kerry Loughlin, a spokesperson for Seattle Housing Alliance.
“We’re optimistic that [the shutdown] will get resolved before it gets to that point,” Loughlin said. “If this goes beyond March, this nation is in a very, very dire situation.”
Along with jeopardized housing, the Supplemental Nutrition Assistance Program (SNAP) may run out of funding for food stamps in March. In Washington, 900,000 children and adults receive these food benefits.
¾ of SHA’s tenants are either elderly, disabled, or children, so many of them rely on food stamp services, Social Security, Medicare, Medicaid, and other federal programs.
“Millions are in jeopardy,” Coughlin said. “This puts everybody right on the edge of a very precarious situation.”
The evidence of this instability is everywhere—unkempt National Parks are overflowing with trash, immigration courts are backlogged by more than 800,000 cases, tribal communities have lost funding for basic services, and federal employees are lining up outside food banks.
With no end in sight and the Capitol in gridlock, millions of Americans are feeling the growing impact this political standoff has on their livelihood.