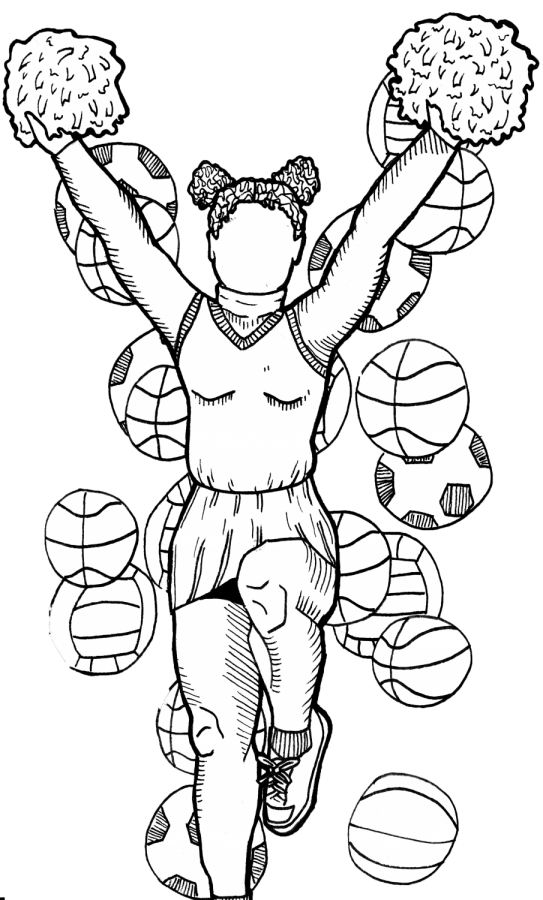 It’s the homecoming assembly, Garfield’s biggest hype men, the cheerleaders, are dancing, stepping, and performing one of their most famous cheers, Y-E-L-L. Suddenly, the cheerleaders crowd in one place and raise one of the girls high into the air. Another one follows on the right side and they both fall effortlessly into their teammates’ hands. That’s something we’ve never seen before.

This year, the athletic department has decided to make cheer an official Garfield sport, instead of an activity, a designation it has held in the past. This decision comes with many benefits to the cheer squad as they can now participate in competitions and overall competitive cheer as well as perform their own stunts.

“We want to enhance the cheer program when elevating girls sports,” said Athletic Director Carol Lynch. “Cheerleaders went to cheer camp this summer and are beginning to stunt as well.”

The change will not affect funding in any way as no teams get funding.

However this change does come with many consequences which can be seen in many cheerleaders’ reactions.

With cheer becoming an official two-season sport, cheerleaders are now no longer allowed to participate in other fall and winter sports.

“No one at Garfield is allowed to participate in two sports,” Lynch said.

“I was told I couldn’t continue with cheer and volleyball, but I still went to summer practices for cheer,” said Sierra Bradford, a varsity volleyball captain and now ex-cheerleader. “I did it last year, I don’t understand why I can’t do it this year.”

Last year, when cheer was just an activity, Bradford participated in both athletics throughout the 2017/18 school year.

“The two sports were different types of teamwork,” Bradford said. “I loved what I did. It made me more well rounded as a student and person, I met different people and it gave me more school spirit.”

However this year, due to the new rule, she decided to continue with volleyball as she took on her role as captain.

“I chose volleyball because I felt like I was letting down the other volleyball players.”

Other students have also been affected, luckily before they could really get attached to cheer. As a sophomore at Garfield, Mahalia Lagazo’s cheer career came as quickly as it ended. This school year would have been Lagazo’s first year at cheer, however, like Bradford, she gave up cheer for volleyball.

“I feel like it’s holding me back from being an active student, I want to represent Garfield,” said Lagazo. These girls will not be able to rejoin cheer after volleyball season ends.

With the competitive season coming up in the winter, cheer needs a lot more time commitment; this new restriction allows students to focus on one thing at a time.

“How can students focus on their academics,  multiple sports and their outside life,” Lynch said.“Many often also have a job.”

Garfield isn’t the only school with these new cheer restrictions however. Zoe, a sophomore at Ballard high school had to face this new rule as well, regarding her participation in cheer and gymnastics. At Ballard the restriction to not be able to do cheer and another sport came this year as well.

“[Last year] the practices often conflicted, I always had to decide which sport needed me most,” Zoe said. “Now you can’t cheer and do gymnastics.”

She stated that people have done both in the years prior but the coaches decided to crack down on it this year.

“Ballard has an extremely strong cheer program, we want to give our girls that same chance,” Lynch said.

Zoe, who has been doing gymnastics since she was three years old saw this as a very tough decision, but decided to continue with cheer.

“I see the policy as a good thing,” Zoe said. “I was pretty stressed last year but this year already feels less stressful. It’s definitely for the benefit of the athlete.”

Either way, if making cheer a sport focuses on enhancing the cheer team and its place at Garfield, then the restriction might have just been a means to an end.