Bless the Rains Down in Africa Town 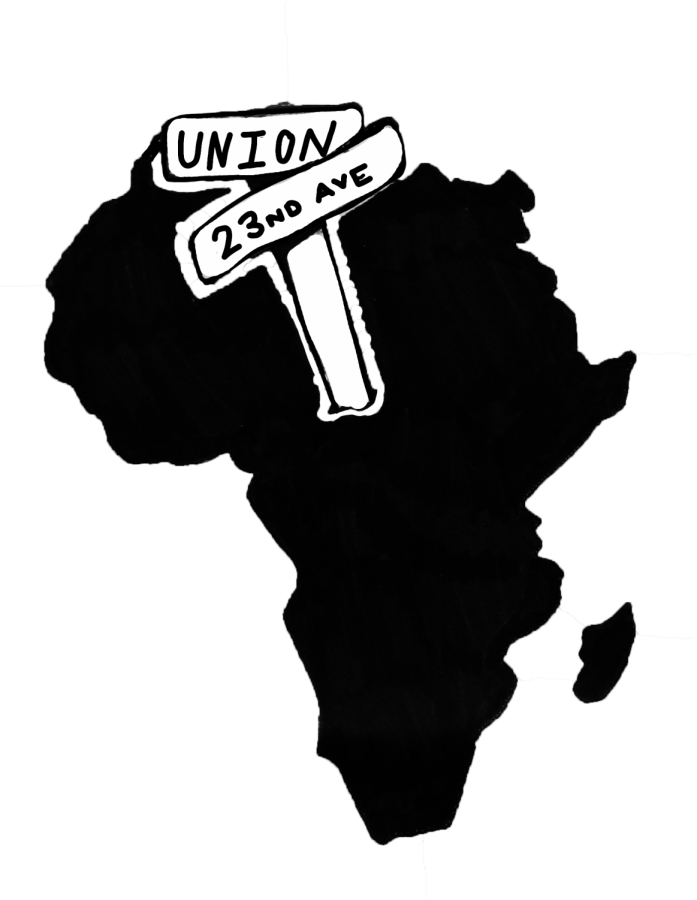 Residents on their morning coffee runs, drivers on their route to school, and nearby business owners have gawked and wondered why Earls Cuts and Styles is now covered in fresh red, green, and black paint, with the words “IMAGINE AFRICA TOWN” neatly pasted on top.
Africa Town, a new Black community and business hub on 23rd Ave & E Union St, has recently gained attention as it became Seattle’s new project to slow rates of gentrification, a process that renovates low-income urban areas to appeal to wealthier, affluent residents.
Because gentrification continues to affect many neighborhoods of Seattle, many residents of color—particularly Black folks—are uprooted from their homes and forced to relocate outside of the Central District (C.D.), a historically Black neighborhood in Seattle.
“There was a pretty close knit Black community here, but definitely in our neighborhood [now] we’re surrounded by white people. Coming from it being predominantly Black, there’s not really that sense of Black community anymore,” said Falisha Samuels, a Garfield senior and lifelong resident of the C.D.
However, the presence of Africa Town allows for a strong, Black familial dynamic between residents of the C.D. to be reestablished. Additionally, Africa Town can serve as a great gathering spot, allowing for Black culture and community to flourish. Even as Africa Town was being built, residents and members of the community came together to paint the mural. Although it was a seemingly simple activity, this neighborhood art project greatly reflects the soul and community aspect of Africa Town.
“I got to paint, and it was cool! It was Black people painting, getting together, listening to music, and things like that,” said Samuels.
Aside from the community aspect, Africa Town also allows for Black businesses to have an opportunity to regain their footing and placement in a city dominated by wealthy, white residents and businesses.
Despite Africa Town being a progressive project to allow the growth of Black businesses and community in the area, it’s important to recognize that this is only a start towards dismantling the systematic racism in the C.D.
“It’s good that we are getting around to actually keeping this space for us. I think it’s still just sad to see everything around it because, even though we have this center now, there’s so many Black folks who can’t afford to live here anymore, or who have kind of been moved or displaced.” said Samuels.
That being said, Africa Town is hoping to offset some of the impacts of gentrification, as well as serve as a catalyst for reversing the layers of racism embedded in the C.D.’s construction and history.