The Garfield Messenger • May 22, 2018 • https://www.garfieldmessenger.org/4635/articles/features/why-are-you-here/

Why Are You Here? 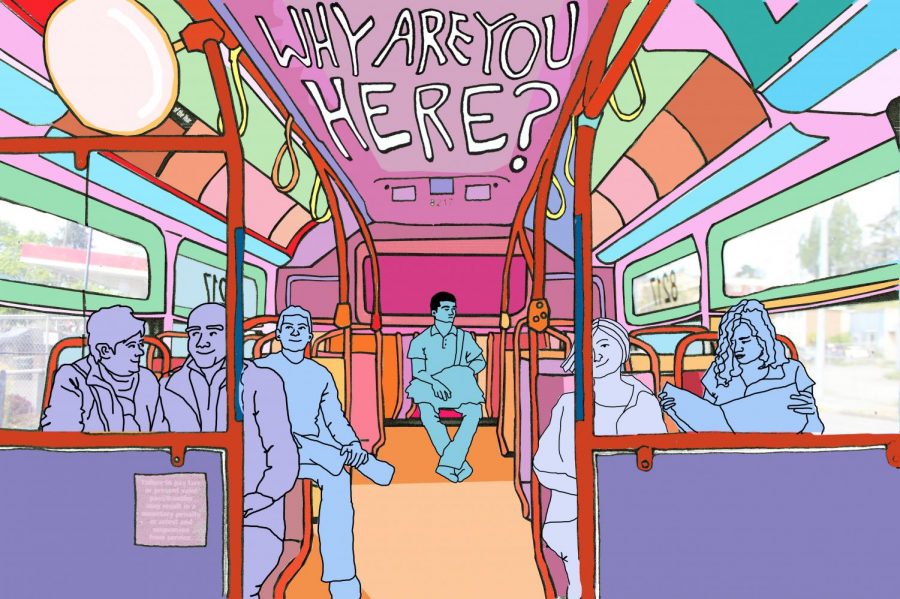 As the population rapidly increases and new buildings seem to pop up daily, it can feel to many that Seattle is no longer their own. Who are Seattleites? Why are they here? To start answering this question we chose to ride the arteries of the city– the metro bus. We rode the 48 bus from Garfield High School to the Mt. Baker Transit Station, and up to the University of Washington asking riders “Why are you here?” Through graphic multimedia we explored and illustrated the responses we received.

“It takes me three busses to get to her.”

“We’re going to a donut shop on Roosevelt and 45th. I don’t know the name of the donut shop… but it’s a good thing… or else the word would get out.”

“My favorite donut flavor is chocolate with the cream filling.”

“ It’s a long story. I’ve lived all over… Dixie, New York, now I live here. I was riding with my biker club, The Dixie Club, and I lost my eye and had to get surgery. I don’t ride anymore ‘cause I can’t legally get a license. “

“ I’m an honest to God Seattle Native. I was born at Swedish before they started taking over the world.”

“When I was 9 and my sister was 10– Irish twins ya know?– we filled a bucket with flounder”