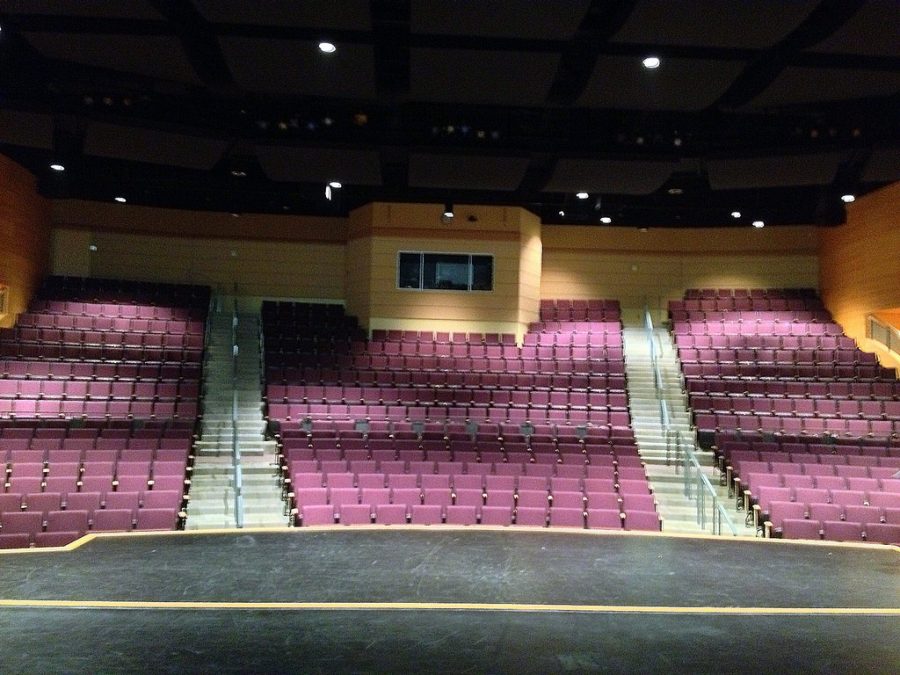 Lights! Camera! Action! The theatre and other performing arts programs at Garfield thrive in their ability to put on fresh and entertaining productions year round. However, at a sports dominated school, these creative programs are often masked by the shadows of the basketball courts and football fields. Despite this fact, the Garfield Theatre program was determined to bring its name to light at this year’s State Thespian Festival, a theatre competition where around 1,500 students from over 50 schools gather at a university to perform and compete in their performing and technical/management skills and abilities. In addition to the whole theatre program winning the Silver Troupe Award, many individual Garfield students returned home with a variety of shimmering metals, gleaming awards, and polished plaques to make a home in our theatre’s trophy case.

Stage Manager Showcase Award
Awarded to Junior Julia Haralson
The theatre program would be nothing without the hard work and dedication of the tech crew, especially of its stage manager. Stage managers are graded for their diligence in creating a professional blocking and production call books, as well striving to properly achieve the director’s vision for the show.
“Particularly for the show She Kills Monsters, it’s supposed to be a show that represents the LGBTQ community, but it doesn’t do a great job of that…in a way I kind of wanted to prove to myself that real actual gay women…could do so much more than what the show presented” said Haralson. “Winning that award, with that [She Kills Monsters] prompt book…was very meaningful because I felt that I proved to myself I wasn’t the stereotype represented in the show.”
It was no surprise that a student as organized and zealous as Haralson would be deserving of such an award.

Superior Excellence Monologue Award
Awarded to Senior Morgan Gwilym Tso (won at the regional level, qualifier for nationals)
Although performing alone, Senior Morgan Gwilym Tso received a superior award at the regional level, which allowed him to qualify for the competition at a state and national level. This an award given to those who can convey their monologue performance with advanced acting techniques and effective use of the script,
“Knowing that I as individual was able to win it, was something to be proud of,” said Morgan Gwilym Tso.
Due to his lengthy experience in theatre, Gwilym Tso’s ability to properly recite a monologue in a creativity, unique, and dramatic manner is a skill set he was able to master.

Lighting Design Production Showcase Award
Awarded to Senior Elam Grekkin
Aside from the importance of the on stage performance, a show simply would not be attainable without lighting. Senior Elam Grekkin was awarded for his high levels of expertise in his original lighting designs. With advanced creativity and fresh ideas, winners of this award must present a lighting design that works to actively capture the director’s vision and highlight the stage in an effective and skilled manner.
“I was a little surprised…it was a lot of work that was put into it” said Grekkin.
Although lights may be something that a typical audience member may not appreciate, it’s important to highlight the hard work and dedication many tech students put in, in order to create a visually appealing show.

Double Excellence for One Act Poor Shem
Awarded to Senior Lily Mundell (director), Junior Olivia Goss (actor,), Junior Becca Salenjus (actor), and Junior Georgia Skerritt (actor)
At Thespi Fest, four students worked fervently for months to perform the one act, Poor Shem, which originally faced some hurdles on its journey.
However, it’s apparent that this show had a cast of diligent and creative workers, in order to bounce back from its rough patch, and perform with resounding success.
“I was originally told not to do [the show], but I decided to do it anyway. I had this extra pressure to make the show really good…we were like the underdogs” said Lily Mundell.
Although this show was first met with apprehension and distaste, it surprised many due to its unique plot and superb acting. Poor Shem was rewarded when it received a double excellence award, meaning it was in the top 20th percentile of its category.
“The fact that out of 1500 students, the 4 of us made it, I was really proud of us!” said Georgia Skerritt. “I had never done Garfield Theatre before, so it was exciting to…get feedback that was positive,” said Olivia Goss.