How the community is combatting Eurocentric courses.

A diverse group of students, teachers, and parents attended the Seattle Public School board meeting on March 15th to advocate for a district-wide integration of non-Eurocentric curriculums, particularly in history departments. These curriculums, better known as ethnic studies, aim to provide an education of world history from the viewpoint of cultures outside of the Western influence and allow students of color to learn more about their own ethnic backgrounds, both in America and overseas. The push for ethnic studies demands both a change in existing classes, as well as a whole new course covering the topic.

This push recognizes that white students may take for granted the knowledge correlated with the disproportionate prominence of caucasian history in modern education; Senior Bailey Adams, president of the Black Student Union (BSU) at Garfield, explained that many minority communities haven’t been given the same education about their ancestors as their white counterparts. She said that “People [of color] really want to learn…how [ethnic groups] impacted America on a greater scale…not just black and white, but a bunch of other cultures  too.”

Even though organizations like the Seattle/King County National Association for the Advancement of Colored People (NAACP), have advocated for the integration of more ethnic perspectives into our education, the push for ethnic studies courses gained attention in January at Garfield’s MLK Holiday celebration. Representatives from the Seattle/King County NAACP told an audience that they had proposed a resolution for making ethnic studies a required part of public school curriculum over a three-year span. This resolution also aimed to make bigger changes in public education, outside of history classes: to combat institutionalized racism and the realities of white supremacy inside all curriculums.The NAACP chapter had given this resolution to Seattle’s school district, from whom no immediate response was given.

The March 15th board meeting was used as a way to advocate for the NAACP’s January resolution. Testimonies spoken by members of the crowd, especially those from students of color, were influential enough that the district’s Board of Directors unanimously expressed their favor of incorporating ethnic studies courses. As of April 1st, they have yet to formulate an official response.

If the district agrees to follow the NAACP’s resolution, supporters hope that the ethnic studies courses will become an integral part of many students’ educations.

Adams detailed this ideal: “It would be a whole new class, and…you get a history credit for it…it’s not an elective, with teachers trained around it.”

The Seattle/King County NAACP and

the rest of the ethnic studies movement needs as much support as possible to show SPS that students and families want this change. Visit their website (www.seattlekingcountynaacp.org) or scan this barcode with a  QR code scanner app on your smartphone to sign their online petition for getting SPS to adopt the NAACP’s resolution. 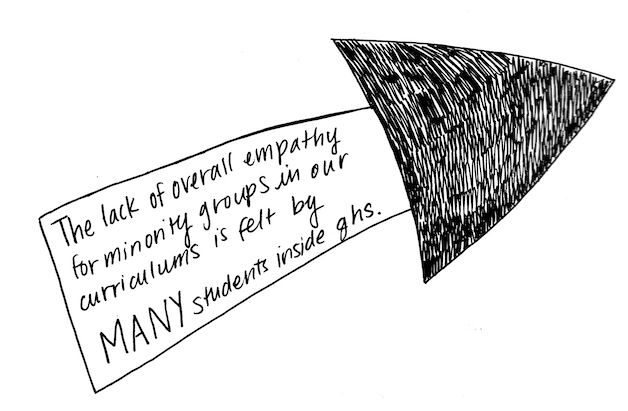