Do I Not Belong Anymore?

Gentrification in your community. 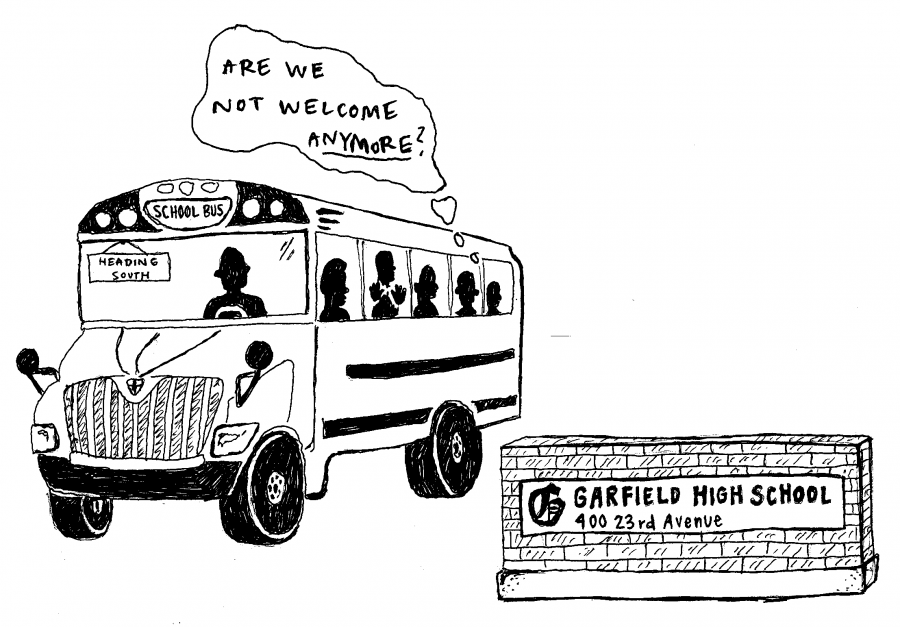 It’s not merely an improvement or renovation, nor is it as simple as a statistic or demographic. It is a real process that continues to flourish in many neighborhoods, seeping into the lives of individuals and drastically altering communities to conform to “middle-class taste.” In the Central District (CD), both former and current residents can attest to the harm and destruction that gentrification generates when allowed and encouraged in an area historically inhabited by minorities.

For Khalia Carter, it was her move back from Atlanta to an unwelcoming CD that prompted her realization that there’s more to it than a Google searched definition. It was then, by the age of 17, that she discovered for the first time, “Gentrification is equivalent to exploitation.”

As a little girl, Carter distinctly remembered watching a news story about a black man killed by police while driving  on Union Street. It bothered her that in a place where people of color once died for selling drugs, the newly legal Uncle Ike’s Pot Shop could thrive and make a profit without facing such consequences. This was one element of gentrification that was especially hard for Carter to swallow, considering the history of the CD.

The black population in the CD is declining quickly at a remarkably fast pace. According to the U.S. Census Bureau, in 1970, the community was 73% black, with the remaining 16% being non-Hispanic white and 11% labelled as “other.” Within the next decade, that number dropped to 64%, and today, it continues to decline by 1% each year. It is projected that by 2019, the neighborhood will possess a 62% white population, with only 14% being black.

Carter noted that in the historically black CD, individuals initially didn’t have a say in where they could live. Due to racial restrictive covenants that inhibited blacks, and oftentimes Asians and Jews, from purchasing property outside of the CD/Chinatown International District, they were forced to make do with what they could avail. This was a process known as redlining, in which Seattle banks refused to provide financial services and loans to anyone living within the perimeters of the CD.

But in recent years, an influx of people, typically white and middle-class, have moved into the neighborhood at their own expense for its convenience and proximity to Downtown Seattle. Essentially, the city is rebuilding the district where it originally desired people of low-income to live in such a way that pushes these same families out.

Flora “Jean” Marks, an African-American woman who moved into the CD in 1971, started noticing these changes during the late 1990s.

“[African-American and low-income families] have moved out. Everybody just moved back to Kent and Federal Way,” she said. One of the most prominent consequences of gentrification is the forced relocation of communities of color. When affluent people come into these areas, they increase the costs of living, which poses a challenge for long-established residents that cannot financially afford these changes.

The development of Washington-based corporations, such as Microsoft and Amazon, as well as businesses like Trader Joe’s, link to gentrification as well, since they attract white and wealthier groups to the neighborhood for jobs and retail. As a result, numerous restaurants in the CD that once served the black population are no longer present. Marks pointed out that over time, she had grown keen to the disappearance of many local soul food restaurants in her community.

Andresen recognized the dangers that come with being unaware of how innocent actions can contribute to a larger system of oppression that targets people of color.

“If you ask a white person, that white person might say, ‘Yeah, gentrification is good,’ because it’s benefiting them. But they don’t realize that somebody’s getting kicked out under the context of ‘improvement.’ Whatever improvement is.”

Given that a number of former residents were forced to leave the CD, Carter acknowledged that her grandparents are among the “privileged” for owning the same house since the 1960s. Up until the age of 7, she lived with them, then left for Atlanta. While this move was not a direct effect of gentrification, Carter began to fully grasp what it meant to be an African-American woman in the CD after returning home ten years later.

“I started to notice changes in the community the second I moved back here in 2010,” said Carter. “People on my street would look at me as if I didn’t belong. They just look at you like, Get out [of here].”

Marks had experienced similar unpleasant encounters in the CD throughout her lifetime. She expressed how her neighborhood had not only lost residents, but an aspect of friendliness and acceptance that once unified the community.

“A lot of times, some people just pass by and they’d look right in my face, and they would not speak,” she shared. “You know, one time I did speak to one and they didn’t say anything. And I said, ‘Okay, that’s fine.’ That’s fine, because I’m not going to change myself because one person don’t speak. I keep being myself.”

When registering for school, Carter expected to receive top priority into Garfield, since her grandparents’ house was located within a 5-mile radius of the campus. To her dismay, that was not the case.

Instead, she was assigned to Rainier Beach High School, which took at least one to one and a half hours of commute each way via Bus 48. Even though she doesn’t regret attending Rainier Beach, Carter admitted that not having a choice in her education worsened the feeling of exclusion she fostered for being a stranger in her own neighborhood.

“It was just another way to remind me that I didn’t even belong [in the Central District], because I couldn’t even get into their school.”

How is this an outcome of gentrification? As Carter put it, it is “because [Seattle] pushed all the minorities out.” She explained how Garfield became a “magnet school,” meaning that it specifically aimed to attract white students to the campus, therefore allowing them to primarily benefit from the system. In the same way, Garfield’s AP program reproduces the same type of racial division among students in AP/honors vs. regular classes.

On a broader scale, Carter believed that the CD, as a whole, has transformed into a community that promotes white privilege. One specific incident she recalled was asking a random couple along the street how they felt about older residents being pushed out of the neighborhood. Based on their responses, it didn’t appear that they cared much about the issue. In fact, Carter was convinced that not many Seattleites at all genuinely care about the well-being of minorities in these areas.

“They’re not helping people. They took advantage of them. If anything, they should help residents change the community, instead of pushing people out,” she stated. “That’s Seattle’s fault.”

Although the presence of problems like gentrification can build a sense of community amongst those who fight back, nothing can take away from the fact that it is a real issue negatively impacting the lives of neighbors, close friends, and classmates. It’s more than a frequently mentioned topic in the news, and there’s more to it than a word for people of color to “pull the race card” whenever they feel like.

Carter contemplated on what gentrification meant to her on a deeper level, as well as how the matter had affected her outlook on life.

“I can definitely say that gentrification has opened my eyes more, and it’s made me realize that we, as the human race, don’t care about one another. Because if we did, we would help people instead of exploiting them.”