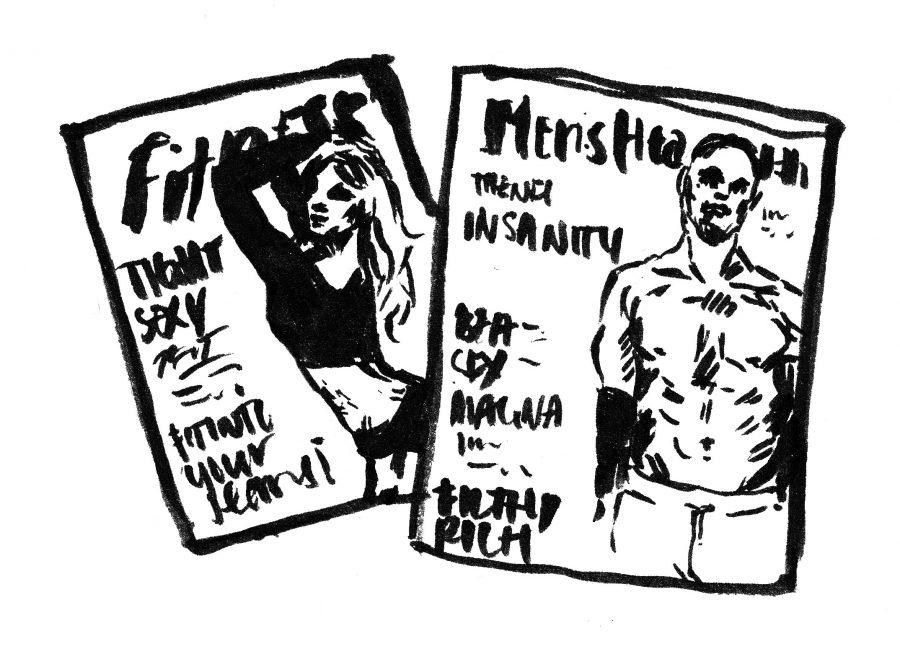 It isn’t new information that people suffer from body images established by modern culture. From comparing stomach rolls to envying thigh gaps, idolizing a certain appearance has become a societal habit. But as any good health class teaches, having unhealthy body image goals can create a dangerous way of life: severe dieting can become a life-threatening eating disorder, and over-exercise can lead to immense exhaustion, injuries like stress fractures, and sometimes depression.

Many athletes know the pressure to meet these physique expectations is even more coveted and important since the state of a person’s body determines their success in that activity. In fact, according to the Eating Disorder Hope organization, athletes, especially women, are more likely to develop body image issues than the normal population. A common way that athletes respond to their body insecurities is to alter their food intake, leading to eating disorders; a study done in 2011 by the National Eating Disorder Association found that over a third of Division 1 NCAA female athletes had symptoms of anorexia.

While body image issues have the ability to affect all athletes, those who participate in aesthetic (gymnastics, diving, figure skating), endurance (distance running, cycling), and weight class (martial arts, wrestling, lightweight rowing) sports have a greater tendency to develop unhealthy body images. Athletes in these sports, most of which base performance on judging, are ten percent more likely to have eating disorders than those in sports that are refereed, according to the National Association of Anorexia Nervosa and Associated Disorders.

Uniforms required for those participating in sports also contribute to the pressures of body image. Many athletes are expected to wear clothing that reveals more of their body than they would show on a regular basis, creating a heightened level of self-consciousness (see Bulldog Bodies to the right). Junior Anna Vinnedge, who started swimming competitively in fifth grade, said that she immediately associated body issues with her sport’s attire: “I’ve noticed [body image issues] since I’ve started. We’re all in swimsuits and there’s not a lot of room to hide.”

The outfits for female athletes in certain sports compared to their male counterparts is also a part of the pressure involved with body image; many female uniforms are much more revealing than the male  uniforms of the same sport, like in volleyball, running, and tennis. According to the Eating Disorder Hope organization, the lack of coverage in female uniforms can turn into sexualization or sexploitation. This suggests to female athletes that the focus isn’t necessarily on the athlete’s performance, but rather on how she looks.

Female athletes also have to compete with the body images expected by everyday society and the ones expected by their sports, which usually don’t coincide. Senior wrestler QiYi Wu sees this discepancy through the body requirements in her sport: “I think it is very different than the beauty standard society has; they expect girls to be more slim and tall, not too muscular… But in wrestling you have to be very strong, which isn’t what people would normally expect from a girl.” An anonymous, Garfield athlete also commented on the differing expectancies in a survey (see right): “Society has such a double standard with women athletes. We get strong, healthy, kickass bodies we should be proud of, but instead we get mocked if we look to masculine or get told we look like we can’t handle what we do if we look too ‘delicate’ or if we’re fat and we shouldn’t be playing sports at all.”

But the athletes don’t need to adhere to the negative connotations that these sterotypes bring.

“Sports in general should help body image a lot. For me whenever I have body image issues, I just think of the things my body can do because of my sport. Like my arms may be the size of men’s and I get made fun of sometimes, but these arms can swim the mile,” said Vinnedge.

Wu agrees that sports have the ability to foster a community of athletes that embrace their body: “Many wrestler girls have struggled with that… at first some didn’t want to weigh [themselves] without their clothes on because they were a little insecure..by the end they were really comfortable with themselves and their own body”

Senior runner Henry Milodragovich states that stereotypes set up by different sports aren’t always accurate: “Freshman year when I showed up to captain’s practices, I saw all the tall, skinny senior boys and assumed they were good, but the fastest guy was this big, barrel-chested, stout guy.” (The athlete Milodragovich refers to currently holds the Garfield school record for the 5k).

If you are struggling with body image issues, even if you’rew not an athlete, there’s always help- the Teen Health Center’s counselours is a good place to start looking for help and/or information.