Pinning Down the Basics

A peek into high school wrestling. 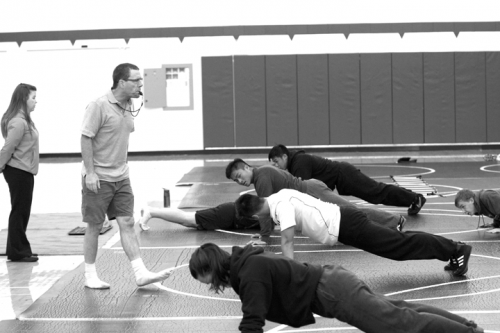 There is not a wrestler out there who would tell you that wrestling is a comfortable sport. It is both physically intense and mentally exhausting; warm ups begin with a mile run, and can take an hour or more. Despite this, or perhaps because of it, Garfield’s wrestlers this year are motivated and full of determination.

As the wrestling coach who is primarily responsible for the team’s conditioning, Coach Hamilton asserts that being in good physical condition is essential.

“Wrestling is six minutes of extremely intense activity, assuming you last the full six minutes,” Hamilton said. “It’s very possible that wrestling might be the most physically demanding sport that we offer here at Garfield.”

And yet newcomers to the sport often underestimate just how rigorous and taxing wrestling really is. While some of the toughest parts of practice such as calisthenics and conditioning are to be expected, elements such as sprint and suicide drills in a sport that contains no running are often more than they bargained for. In addition, wrestlers must stay within their weight class; being just a half pound over the limit could pit you against wrestlers ten pounds heavier.

Senior captain Henry Conner was one such newcomer who learned his lesson the hard way.

“When I first started, I knew it was going to be quite literally rolling around on a mat with another person, trying to pin them on their back,” Conner said. “But I did not expect it to be as physically intensive as it is.”

wouldn’t know otherwise,” captain Conner said. “I feel like more so than any other sports team, we’re the closest to a family.”

This kind of community building is at the root of why wrestling is fundamentally a team sport, and it’s part of the reason why sophomore Kosimo Tonn is drawn to wrestling.

“It’s a common misconception that wrestling is just [an individual] sport,” Tonn said. “You have only one person on the mat, but you have your whole team cheering you on the sideline.”

And perhaps one of the most attractive elements of the sport overall, the supportive and fun team environment wrestling offers is also able to overcome social boundaries such as gender and race.

“A lot of people have also addressed the gender issue, with when girls wrestle guys: do they go easy? Or is there a difference?” captain Wu said. “It’s just an opponent, there’s no gender or race or anything. You’re just wrestling another person.”

To the undiscerning eye, wrestling matches often appear as a knot of tangled limbs rolling around on a mat. Here to bring order to it all, a brief overview of how it all goes down:

Matches are divided into three, two minute rounds with two main ways to win. The first and most immediate way is to pin the opponent on their back at any time during the three rounds, thus ending the match. For it to be considered a win, both the opponent’s shoulder blades must be touching the mat for a full two seconds.

It’s also possible that neither side is able to pin the other within six minutes, which brings us to winning method number two. Different moves in wrestling are worth set amounts of points. If no one is pinned by the end of six minutes, whoever racks up the most points during the three rounds wins.

Here are some examples of point earning moves:

Takedown (2 points): Moving from a neutral standing position to take your opponent down to the mat.

Escape (1 point): Breaking away from a position on all fours under the opponent.

Near fall (up to 3 points): Getting the opponent’s back less than 45 degrees from the mat. The longer it’s kept, the more points are earned.

The best way to learn more about wrestling, though, is to watch or experience it firsthand. Videos of Garfield’s wrestling matches can be found on their Youtube channel Garfield Wrestling. Better yet, come out and support the team during their home matches!