Running with the Big Dogs 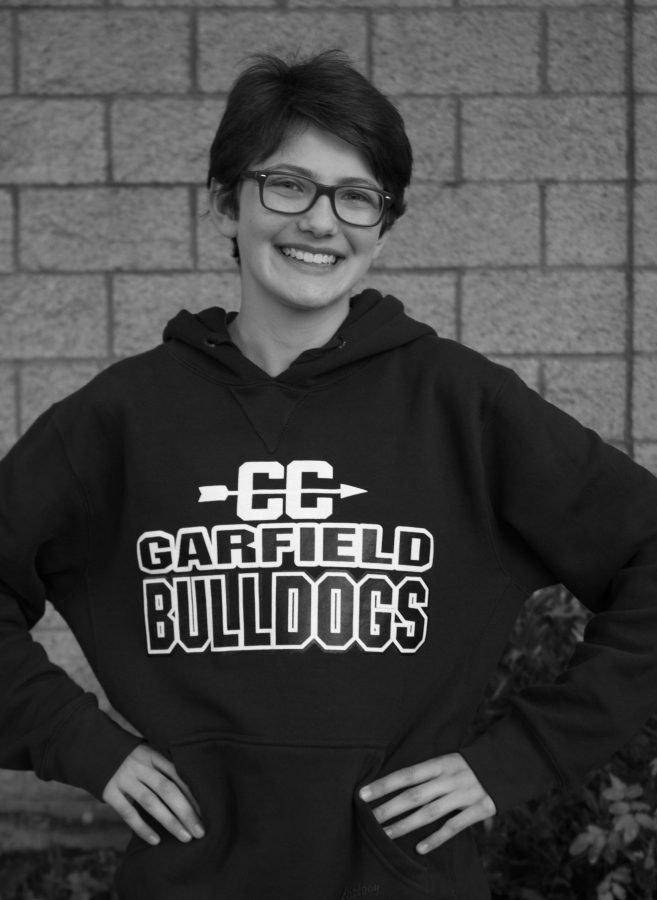 Garfield has a history of churning out amazing female runners. In recent years, the team has had girls recruited to Ivy League schools for cross country, like Emma Lower who is competing for Yale, and Izzi Olive who started running at Brown this fall. Sophomore Isabel Schmidt is the latest of these powerhouses, only a second and a half away from her season goal of running a 5K in under 19 minutes.

As one of Garfield’s fastest competitors this season, Schmidt has done incredibly well.  In fact, she’s gotten first place at three out of five metro league meets this season, besting her freshman time by over a minute.

“It’s kind of scary to lead a race.  In the races I’ve led, it’s like, ‘Am I really in the front?’  It’s kind of thrilling at the same time,” said Schmidt, “I’m nervous but it’s so exciting.”

“I started running track in second grade. I really liked it, and it was available. Some kids start skiing because their parents ski, I started running….I can’t ski,” said Schmidt.

Cross country, a sport that requires one to run long distances while maintaining high speeds, has been a good fit for Schmidt since childhood.

“I started running longer distances with my dad the summer before third grade, when he would always go out on runs in the morning and I would be like ‘Where are you going?  Can I come?’ We’ve been running together since, I thought cross country would be perfect for me,” said Schmidt.

Since joining cross country partway through the fall season of her freshman year, Schmidt has become an integral part of the team’s spirit and competitive nature.

“She is probably the quirkiest girl I know, and she definitely stands out in the crowd. She’s very inspirational, and she makes the vibe very fun and less serious all the time,” said junior cross country captain Lily Hayes.

But the thrill of a race isn’t the only reason she loves running; the atmosphere of the team makes the hard work worthwhile.

“My experience with the Garfield team has been so wonderful and positive. Joining was probably the best thing that happened to me freshman year; I came into the season about ten days late, and they were so welcoming. It’s continually surprising how nice and inclusive everyone is, and the pasta feeds are great!” said Schmidt.

This sense of community is one of the things that has pushed Schmidt to achieve so many things so early in her high school career. In fact, she finds moments with her teammates to be her favorite part of the sport.

“I love hugging my teammates after races, and getting encouragement from older runners. I’ve learned how amazing people can be, and how running can connect people,” said Schmidt.

So far in her second Garfield season, Schmidt has been impressing her teammates with her work ethic and determination.

“She’s made a lot of improvement as a runner, she goes after it and is so great at pushing herself at the end of a race,” said Hayes.

This strategy, to shadow the front runner and then push past them at the very the end, has worked for and against Isabel this season.

“I think it’s way easier to follow people, and be in the front pack and then get to the front at the end.  But in my last race, I was passed at the very end after leading the entire thing.”

Schmidt certainly knows how to go for gold, and this season she is determined to prove herself, not only in terms of placing at meets, but by putting in one hundred percent and not backing down.

“For me personally, it’s so rewarding to really push myself to the limits, it’s so satisfying and I don’t really get that in any other place. Just going completely beyond what you think you can do.”